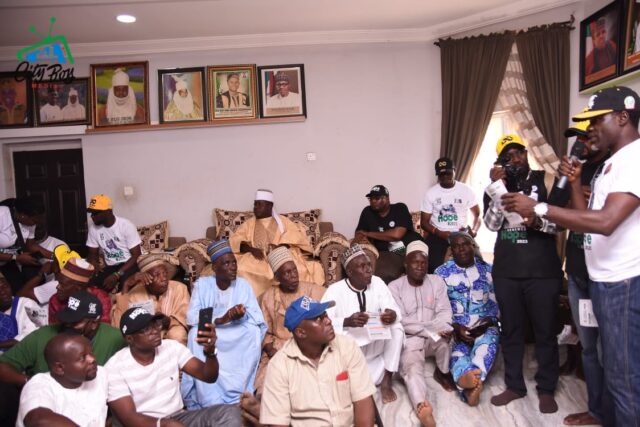 The City Boy Movement has kick started it’s first activities for the year, in preparation for the February 25th, 2023 presidential elections, with a visit to the Maitamaiyi’s palace in Kubwa and a free medical outreach powered by BATMEDICS, to give back to society.

The Director of Mobilization and Social Impact Program Hon. Shoga Francis Oluwatosin who expressed confidence that, come February 25th 2023, the City Boy Movement will use the Presidential and National Assembly elections to win FCT for APC, thereby rooting out Peoples Democratic Party (PDP) from political dominance of the Federal Capital Territory (FCT).

Shoga said the movement has embarked on voters education and sensitisation campaign through the community engagement programmes in all the Area Councils of the FCT, with the sole aim of ensuring victory for APC. He stressed that the door-to-door campaign by his movement was designed primarily to reach out to every nuks and cranny of the Federal Capital Territory, to change the voting narrative of the FCT in favour of Asiwaju Bola Ahmed Tinubu and all the APC candidates for the February 25 general elections.

Former Bwari Area Council Chairman, Hon. Musa Diko who spoke on behalf of the traditional leaders, youth leaders and women of Kubwa reaffirmed the readiness of APC to win the FCT at the next month’s polls.

He emphasized that APC will take over Abuja. Stating that “his people have seen what PDP has done especially in the Senate and House of Representatives. They have nothing to show. The mistake that was made in the past elections would be corrected, and that is why we are going about with this sensitization. We (APC) are set to take over”. Diko said.

While giving a vote of thanks, he expressed his appreciation and that of the community to the City Boy Movement, for there unwavering support and activities in galvanizing voters for Asiwaju Bola Ahmed Tinubu and his running mate Senator Kashim Shettima.