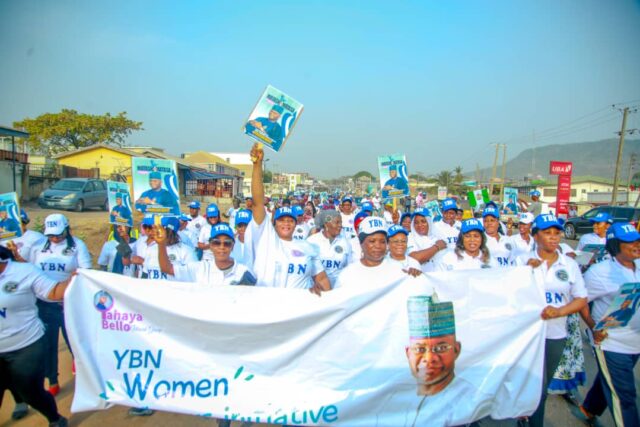 Women across Kogi State under the umbrella of YBN Women Mobiliser Initiative have insisted that Governor Yahaya Bello remained their most preferred choice to emerge as president in 2023 adding that such could be achieved if they speak with one voice.

The women who organized a road walk across Lokoja metropolis and a town hall meeting on Tuesday re-affirmed their support for the Kogi State governor because of his show of love to women adding that he could replicate same feet in the country.

In her opening remarks, the coordinator of the women initiative, Lokoja Local government, Hajiya Fatima Abdulkadiri asserted that Governor Bello has greatly empowered women hence the need for them to reciprocate such good gestures.

Speaking at the event, the Secretary to the State Government, Dr. Folashede Ayoade stated that the governor gives women a place of relevance in his administration because of the value he places on the gender.

She called on women across the country to rally round such a man and give him their support in the forth coming 2023 general election asserting that they were assured that with him at the helm of affairs, women’s concern would always be given priority.

Mrs. Ayoade lauded the women group for their continued support of the governor and for being staunch advocate of the gender friendly leader urging them to further take the message to the nooks and crannies of the nation.

She asserted that their message should encompass the Governor’s achievements in Kogi State in the last six years of his administration including security, unity, infrastructural development among others asserting that these and many more were the many reasons which qualified Governor Bello to clinch the number seat of the nation.

The Kogi State Head of Service, Mrs. Hannah Odiyo in her goodwill message expressed that the nation desired an individual who would hold systems and institutions accountable in all their activities, while ensuring proper execution, implementation of programmes, project and such traits resides in the person of Governor Bello.

Also while admonishing fellow women to support the Governor the Director General Pension Commission, Mrs Mariam Ozioma expressed that women wants Governor Bello to replicate the feet he has achieved in Kogi state adding that he is young, courageous, bold, women friendly and befitting to lead the nation

Special Adviser to the Governor, on project Monitoring, Hon. Usman Ochidi asserted that it was quiet obvious that Nigerian women loved Governor Bello noting that his appeal was for the All Progressive Congress to relinquish the idea zoning and focus on the quality traits of the next Nigerian president

While speaking with newsmen, the Kogi State chapter Vice Chairman, Yahaya Bello Network (YBN), Hon. Sandra Mimi emphasised the need for women to throw their weight behind the candidacy of Governor Bello.

She expressed further that the Women Mobiliser initiative would continue to go on in earnest across different parts of the country and possibly outside the nation in a bid to educate women on why the Kogi State, women friendly governor deserved their support.