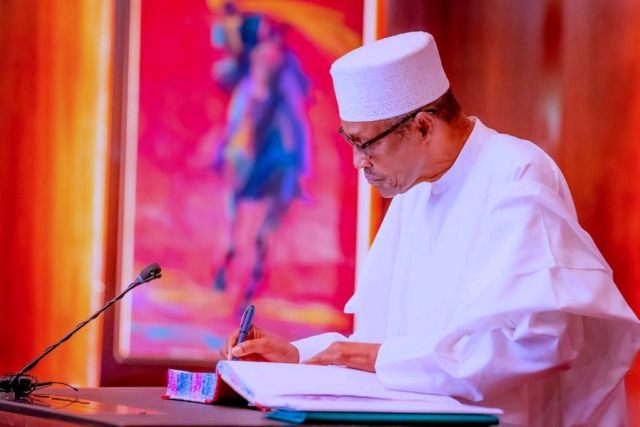 The President, Major General Muhammadu Buhari (retd.), Thursday, said his regime had started taking steps in line with the recommendations of the Niger Delta Development Commission’s forensic audit report submitted to him in September 2021.

He also raised hopes that the much-awaited appointment of board of directors for the commission would begin soon.

Buhari also urged the Niger Delta people to ensure a peaceful atmosphere that would pose no threats to the ongoing developmental projects in the region.

The President gave the assurance at the kick-off of a two-day management retreat organised by the Ministry of Niger Delta Affairs at the Old Banquet Hall, State House, Abuja.

“The report of the audit has been submitted and implementation of its recommendations has commenced in phases. This process will soon usher in a new management and board for the commission.”

To the Niger Delta people, he said “I urge all well-meaning Nigerians, especially the Niger Deltans, to exercise restraint and ensure a conducive and secured environment for implementation of the several developmental projects and programmes in the region.”

Making reference to the ongoing East-West Road project, he described it as one of the largest pieces of infrastructure in Nigeria, and would play a “strategic” role in connecting the region’s busiest commercial cities.

While promising that the road will be completed before his regime ends, he directed the Nigeria National Petroleum Corporation Limited and its subsidiaries to step in and execute Section 4 of the project (Eleme Roundabout to Onne junction) through the tax credit scheme.

“This should be expeditiously addressed considering the importance of the road to our national economy,” he added.

Continuing, President Buhari noted that Strategic Implementation Work Plan, a framework focusing on the objectives raised in the Federal Government’s 20-point Agenda and the Pan Niger Delta Forum’s 16-point Agenda, would be strengthened to provide the framework for coordination of development initiatives in the Niger Delta Region to achieve maximum impact, especially at this critical time.

The President also directed the Permanent Secretary in the Ministry of Niger Delta Affairs to carry out a comprehensive staff audit of the commission, ensuring that it achieves right staffing and proper placement.