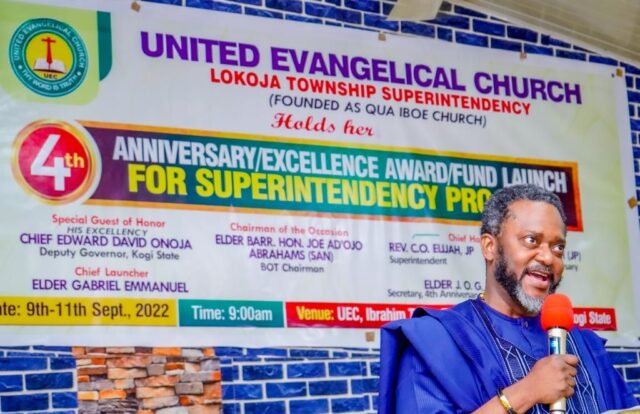 Chief Onoja urged governments in the country to emulate Governor Yahaya Bello whom he said, has inspired a leadership of development, unity and religious tolerance in Kogi State.

He spoke at a church service marking the 4th Anniversary, Excellence Award, and Fund Launch for Projects of the United Evangelical Church, Lokoja Superintendency, on Sunday.

Receiving an Award for his support to mission and evangelism, Chief Onoja said numerous biblical accounts exist to explain the ultimate power of God in choosing leaders using Prime Minister Joseph and King David as examples , saying regardless of all conspiracies, God’s will prevails in the affairs of men. The award was dedicated to Governor Yahaya Bello who found him worthy to be trusted in the offices he has held thus far.

He noted that Governor Bello, despite being a Muslim displayed an undoubted humane disposition towards the unity and tolerance amongst the people which he made evident by building a place for Christian worship in the Kogi Government House Chapel.

He described the construction and completion of the Okpo Central Mosque which he facilitated in 2017 amongst others as “seeds of Love birthing greater seeds of Love” for the Church from Governor Bello, which is the hallmark of the Governor Bello-led New Direction Administration.

The Deputy Governor supported the UEC Project Launch, pledging an education intervention for 35 orphans and indigent students in the Church.

The UEC Lokoja Superintendent, Rev Christmas Elijah led clerics in offering prayers for Governor Bello,Chief Onoja and the New Direction Goverment asking God to grant their heart desires and wisdom as they continue to deliver good governance to the people of the State.

Fire guts Notre-Dame Cathedral in Paris, the second historic church to be burnt