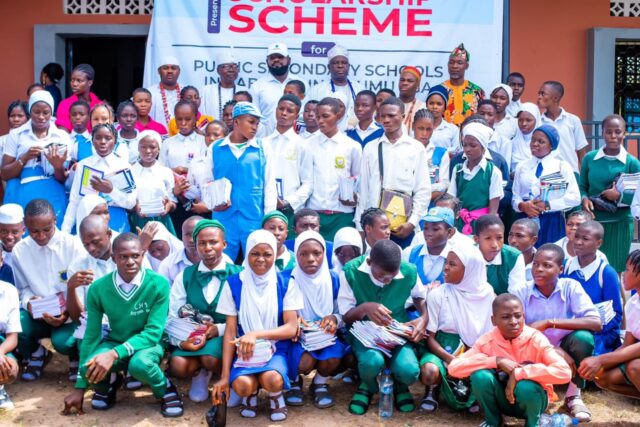 The scholarship awards included the payment of their three term school fees, alongside provision of funds for their West Africa Examination Council (WAEC) fee while each of the beneficiary were provided with academic materials.

The foundation also gifted the sum of 100,000 naira each to two outstanding students (Male and Female) namely Iyiola Felix and Shaibu Esther Ovayoza both whom had just completed their Senior Secondary School and the cash would be used as their first year school fee at the University.

In his opening remarks, Ijumu born philanthropist and Chief Executive Officer of Osaseyi Foundation, Mr. Richard Abayomi Osaseyi said his motivations were founded on his desire to raise leaders who would become successful in their respective professions and would also in the nearest years replicate same gesture.

He recalled that he was once in the shoes of some of this students as a former student in one of the beneficiary school stating that he believed with the little support the students would be assisted and mentored to various professional career path.

The CEO said the foundation’s motto which was “God and humanity” was the entire expression of what he wanted to achieve through the foundation noting that several of the programs would be focused on extending God’s kind gesture to humanity.

While presenting cash gifts of 30,000 naira to some selected teachers (male and Female) for their remarkable sacrifices of impacting knowledge to the young ones, Mr. Richard Osaseyi noted that no amount of financial reward could compensate their work on earth.

The Olujumu of Ijumu Kingdom, HRH, Oba Olusegun Ayeni while making his address appreciated Mr. Richard Osaseyi and his team for the gestures to facilitate educational development in Ijumu Local Government.

The Royal father said He added that Osaseyi was soon becoming a household name in Ijumu and by extension Okun Land because of his passionate investment in developing people and contributing to the welfare of the people entirely rather than gathering material acquisitions.

The Royal father said he was impressed that such a person was willing to contribute meaningfully to his people despite not being a politician and as the young man he was making efforts to build humanity and not wealth.

He said “beneficiaries in the past 2 decades those that benefitted from similar gesture recorded huge successes” while urging the 66 students to see such opportunity as a reason to work harder and make their family, themselves and community proud.

The chairman All Nigeria’s Confederation of Principals of Secondary Schools (ANCOPSS) in Ijumu, Mr. J.A Abayomi described the foundation’s gesture to the student as wonderful and would go a long way to ameliorate the sufferings of some members of the community who could not afford such expenses.

He said that since the beginning of the program some times last year, the foundation has continued to expand the numbers of beneficiaries even as far as other local government area in the state.

While urging other leaders and well meaning Individuals to emulate Osaseyi gestures he noted that the program which it’s odour was perceived some years back God has used Osaseyi Foundation to bring this to reality.

Mrs. Oluwakemi Omeiza Usman, Secretary, International Federation of Women Lawyers (FIDA Kogi) during her presentation congratulated the beneficiaries, advised them to identify their strength in order to guide them while choosing a career path in life.

To me, politics is about service; nothing else – Comrade Abdul reflects as he...