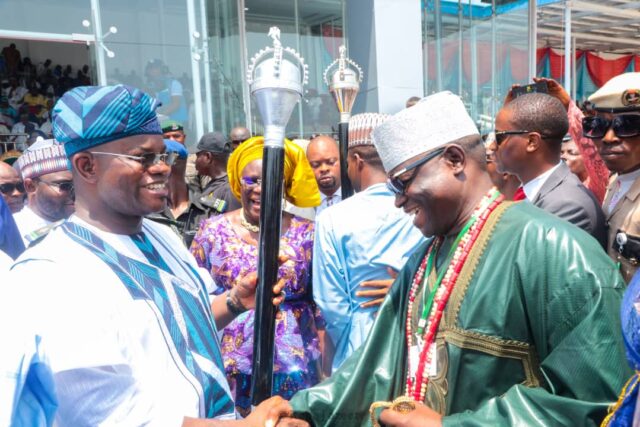 Kogi state governor, Yahaya Bello has advocated that the traditional institution must be consciously included as the fourth tier of government if the nation would enjoy absolute security, peace and tranquility.

He added that traditional rulers are revered as the custodian and owners of the land hence they are grasped with the knowledge of their respective terrain and can easily identify crime perpetrators if they are fully incorporated into the running of government’s affairs.

The Governor made this known on Saturday, during the official presentation of staff of office to 104 approved, graded and upgraded traditional rulers across the 21 Local Government Areas of the state at the Muhammadu Buhari Civic Center Lokoja where 31 first class, 30 Second Class and 43 third class received oath of office.

Governor Bello asserted that his administration wouldn’t have been able to achieve landmark feet in security if not for the buy-in of the traditional institution in the state who plays pivotal role in ensuring that criminals and criminality had no footing in their respective domain.

While the governor reiterated that due process was followed in the outcome of the days event as fairness, equity and justice accorded, he stressed that benefiting traditional rulers were selected because of their impeccable character as well as their contribution to the peace and progress of the state.

The governor specially appreciated President Muhammadu Buhari for his continued show of love to the state, promising not to ever disappoint his trust. He also noted that Kogi State have turned the tide of inherited concerns and vowed to continue striving to sustain the position.

He also hailed the Commissioner for Local Government and Chieftaincy Affairs, Bar. Ozigi Deedat for painstakingly making sure that the process of the day’s outcome was hitch free adding that his work at the ministry were worthy of commendations.

Speaking Earlier, the Commissioner opined that the large crowd and glamour of the event indicated clearly that the people of the state held traditional institution in high esteem while the administration has consistently placed premium priority on the welfare and making sure that they were effective, responsible and responsive.

He added that the past six years of the New Direction Administration has transformed Kogi state politically, socially and economically with infrastructural projects evenly allotted across the three senatorial district of the state and the yet to be commissioned venue of the day’s event was another boost in the infrastructural drive of the government.

Representing the Sultan of Sokoto, Alhaji Muhammed Saad Abubakar iii, the Etsu Nupe, Alhaji Dr. Yahaya praised the state government for another milestone in the history of traditional institution in the state under the governor’s leadership.

While he prayed for the celebrants, he noted that the gesture by the state government was a call to do more in their respective locality in ensuring that the peaceful momentum was sustained.

In their separate goodwill messages, the Atta Igala, HRM Mathew Alaji Opaluwa, Ohinoyi of Ebira Land, HRM, Dr. Ado Ibrahim and the Obaro of Kabba, HRM Oba Solomon Dele Owoniyi commended the government over its cooperative approach to leadership and recognition, premium positioning, respect of the traditional institution in the state.

The traditional heads collectively assured of their continued cooperation with the state government towards sustaining the peace and safety enjoyed in the state, while they urged beneficiaries to continue to do their best by ensuring that their locality and by extension, the state remained peaceful and united.