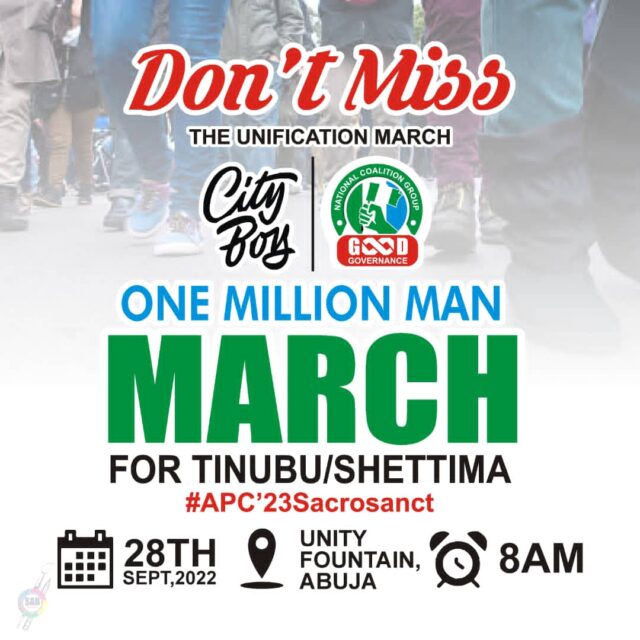 The City Boy Movement in collaboration with National Coalition Group NCG is embarking on a one million man solidarity march for Tinubu-Shettima Presidency, with the theme “Good Governance”. The march is slated for 28th of September, 2022 (Wednesday), 8am prompt, at the Unity Fountain Maitama, Abuja, with many party leaders, young APC stakeholders and a host of celebrities gearing up to attend.

The One Million Man March is organized to bring all APC and Tinubu-Shettima support groups across the country together for familiarization and preparation for the forthcoming general elections. We believe that with the collective support of all the groups, we will sail our competent candidature of Tinubu-Shettima to Presidency come 2023.

The leader of the City Boy Movement and BoT Chairman of NCG Hon. Francis Shoga in a statement declared that the One Million Man March for Tinubu-Shettima will harmonize all support groups for effective coordination ahead of the polls. He assured
us of adequate security and maximum fun for all.
Also stating emphatically that the march is meant to usher in the presidential campaigns for Asiwaju Bola Ahmed Tinubu and Sen Kashim Shettima.

The one million man march which is tagged GOOD GOVERNANCE will be highlighting verifiable leadership traits of Tinubu-Shettima. Noting that nigerians would support and vote Tinubu-Shettima for President in 2023. It promises to be eventful, exciting avenue for exercising the body and connecting with people, while also discussing ways forward.

The Organizing Communities of the March are working tirelessly in ensuring a successful event which all support groups are expected to mobilize their members in numbers to witness the colorful and carnival-like procession, which will kickstart political campaigns in Nigeria.

Birthday: You are a Worthy Ambassador of GYB – Hajiya Rekiya Celebrates Kogi CoS