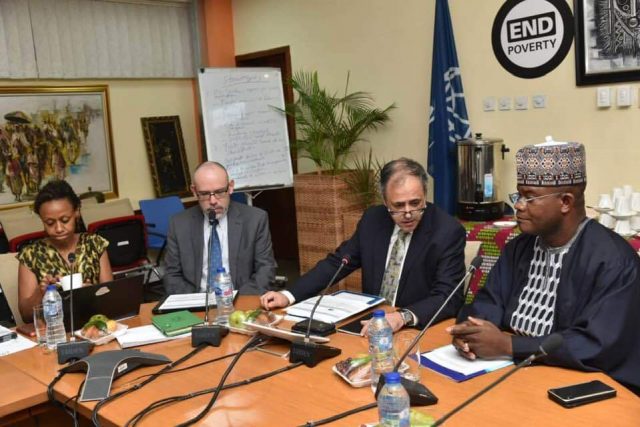 The Word Bank has commended the present administration of Kogi State Governor, Alhaji Yahaya Bello for its developmental strides especially as it concerns prudent utilization of funds in the execution of priority projects for the state.

The World Team gave the commendation on Thursday in Abuja in a meeting where the Governor updated them on World Bank assisted projects in Kogi State.

Governor Bello was praised on several developmental fronts including infrastructure, health, human capital development and the exemplary efforts in prompt counterpart funding for the success of the projects so far executed.

The team noted that has shown uncommon commitment to the health sector, especially the nutrition of young children by complying with the World Bank Nutrition Programme in which Kogi is far ahead of other states of the federation.

They noted that the Social Register of Kogi State is one of the best in the country today and as a result, the state has become the largest beneficiary of the Conditional Cash Transfer because of the robust structure it has put in place.

As far as NEWMAP is concerned, Kogi is an example for others. The Governor has been prompt in the payment of counterpart funds and that is why we are already handling some important projects in the state, the global institution said.

The Governor had in his address intimated the World Bank of a 32 year Infrastructure Master Plan put in place last year by his administration as a framework for achieving integrated infrastructural development and overall economic growth of the State.

He said the Master Plan was also designed as a tool for engaging International Development Partners and Private Sector Investors for long-term sustainable financing options in support of the States budgetary provisions.

“We all know how natural disaster by flooding attributable to Climate Change has become an annual occurrence in states along the banks of the Rivers Niger and Benue. Kogi State is the undisputed epicenter, being the Confluence where both rivers meet, join forces and continue their rampage towards the ocean.

“The past few years have been particularly hard on us in this regard. Nine (9) of our Local Government Areas suffer intensive flooding for about 5 weeks on the average each year followed by long months of difficult recovery only to be hit again the next rainy season. This perennial flooding and the associated loss of lives and damage to properties was catastrophic in 2018. Over 200,000 people were displaced. We catered to nearly 60,000 persons at one time or the other in about 40 IDP camps. The rest, thousands of internally displaced people, were forced to take shelter with friends and families wherever they could.

“Thousands of hectares of farmland were destroyed along with hundreds of homes. Our roads, bridges, water, electricity and other infrastructure washed away on a massive scale across the state to the extent that the President was forced to declare a state of natural disaster and the National Emergency Management Agency (NEMA) and the armed forces were scrambled for the relief effort. The World Bank also stood by us in those trying times and for that we are grateful.

The Governor therefore told the team that the disaster patterns and rising water levels make it clear that this annual flooding will remain the states reality for now, making it imperative that his administration start thinking of long term solutions.

“Even as we speak, the water levels are rising already. Certainly, wholesale and permanent resettlement to higher grounds of low lying communities in several Local Government Areas has become imperative. This simply means that our housing and allied needs are higher and more critical than most States in the country. It is also not a project that any state government can undertake alone. Therefore we urge the World Bank to prioritise an intervention for the relocation of inhabitants of flood prone areas to new settlements upland.”

Governor Bello expressed gratitude for World Banks efforts in the reduction of environmental degradation across several erosion sites in Kogi state under the NEWMAP project and the building of beach embankments.

He said eleven sites were selected and approved for the projects execution by World, adding that eight of the sites were classified critical with three being actual emergencies in need of urgent intervention; namely Lokoja Greater Waterworks erosion site, Federal University Lokoja Permanent Site and Afor Gam-Gam Erosion site.

”We urge the World Bank to still invest some urgency in tackling these rapidly expanding sites, especially the Lokoja Greater Waterworks erosion site which threatens to eat up the only source of water for Lokoja our state capital.”