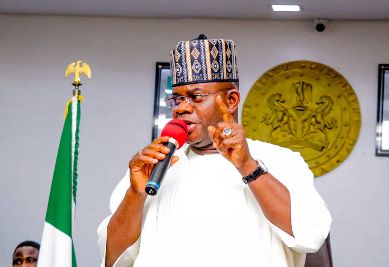 Kogi state governor, Yahaya Bello has assured that Kogi state All Progressive Congress would deliver the highest percentage of votes for the party in the forthcoming 2023 general elections.

The governor gave this assurance while receiving the Vice/Zonal Chairman, North Central of the APC and Executive members who paid a working visit to the state.

The governor also hailed the presidential candidate of the APC, Sen. Bola Ahmed Tinubu as natural problem solver noting that his actions since his emergence has showed reasonable efforts in uniting the party and carrying every stakeholders along.

He re-affirmed that APC in Kogi state was one indivisible family, while he directed that every effort by stakeholders in the party must be in synergy with the party leadership structure in the state noting that such effort would ensure the party stay united with one goal in sight.

Governor Bello however cautioned party leadership to desist from listening to diaspora politicians who were not active members of the party in the state but were trying to jump through the roof to enlist themselves as members. He pointed out that if they were truly part of the party, they should identify with their respective state and the party leadership.

The governor said “I will continue to do my best, particularly when I see the need to foster unity and cohesion in our party” while he affirmed that the All Progressives Congress would be his first and last political party.

In his opening remarks the Vice chairman, North Central APC, Muazu Bawa revealed that they were in the state to undertake a working tour of all the states under the region and interface with party stakeholders based on the directives of the National Working Committee.

He noted that they were assured that the Governor was firmly in charge of affairs in the state and was already making preparations towards ensuring a successful outing for the Party in the general elections.

In his goodwill message, the Senator Representing Kogi East, Isah Jibrin described the governor as a true party man who immediately after the party primaries donated his campaign office to the winner of the outing.

He asserted that the success of the upcoming election relies largely on the governor being saddled with the responsibility to mobilize the youth’s population hence the governor was the core spindle of the 2023 general elections.

Construction of Ultra-Modern Cassava Processing Factory Takes Off In Kogi