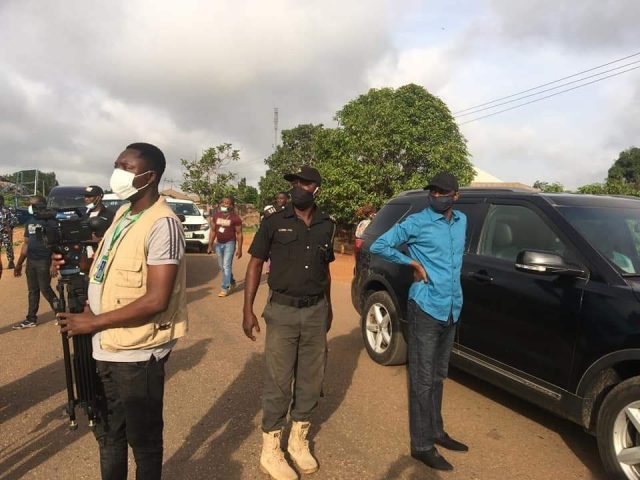 Kajola is a street hosting a four star hotel in the town. Words are the hotel is owned by a popular political figure in Kogi State where the health workers from the State Ministry of Health that were in town for contact tracing and possible testing lodged. The place is empty as guests had possibly deserted it when the lockdown order was pronounced by government three days earlier.

In the morning of Wednesday which was the second day, on arrival at the hotel gate, three young men had stayed few kilometres away from where the health workers and the journalists were emerging for the day’s work. One of them yelled from where they stood; “We no get Coro. Abeg, make dem lift this lockdown o. We no get Coro for Kabba.” The journalists heard this and laughed.

I suggested to colleagues to meet them and request interviews from the young men to hear what they had to say. We then approached them but they took to their heels probably thinking the journalists were coming to lure them into getting arrested by the policemen that stood guard in the area.

As the journalists continued to approach, one of them gestures at them to wait and speak to them. As two of them had gone far ahead, the last one waited to speak. But just before the cameramen could steady their cameras, one of them, probably their leader, emerged from a building behind him and shouted him down. He told him not to speak with the journalists. He spoke in Kabba dialect and the young man obeyed. He declined to grant the interview.

At this point, the newly emerged ‘leader’ spoke directly to the journalists half yelling; “We dey hungry and una want make we come talk to una. We no get Coro for here. Make una dey go.” He is almost getting infuriated by the presence of the journalists. Seeing they were youths, the cameramen left the scene immediately to avoid any unsavoury eventuality. One of them remained just as the rest of the newsmen left the area on their way back to the hotel gate where they were waiting for the arrival of the commissioner for information, Hon Kingsley Fanwo to get set for the day’s monitoring exercise.

Few minutes later, we were motioned to return for the interview. The respondent gave his name simply as Collins. He said the lockdown was having a negative effect on Kabba people socially and economically. He appealed to government to relax the order and allow normalcy to return to the town. He said there is no Covid-19 in the town.

Mrs Abimbola Ajayi sat by the balcony of her home as she looks forlorn. She seemed unconcerned with what was happening around as she steered into empty space. I approached her and only took notice of my presence from the rustling cracks of the dry leaves close to her house as I got close. She seemed to gently jerk back to existence. She looked at me wondering who I was and what I wanted.

When she learnt I was a journalist, she sighed and told me she didn’t like the lockdown either because it had haulted the means through which she make a living. She appealed for its lifting to allow for old status quo. She said life was becoming unbearable for the two days they had stayed indoors.

Their sentiment was echoed by the Obaro of Kabba, Oba Dale Solomon Awoniyi who is the traditional ruler in charge of the area. He expressed sadness over the lockdown, noting that it had brought untold hardship upon his people. He noted that within 24hours of the lockdown, Fulani herdsmen had ravaged their farmlands and destroyed their farm produce.

“Within this 24 hours, our farms have been invaded by Fulani herdsmen. Destroying our yams, our maize, our crops. We cannot survive for 2 days. Even 48 hours lockdown is very devastating for us, especially for the elderly.

“I begged that all measures be carried out without total lockdown, but he explained well to me reasons for the act.

He lamented the negative role being played by some individuals whom he said are out to cause disaffection between the state and his people.

The royal father said that those found to be culpable in bringing the lockdown upon the people would regret their action, adding that he will not be party to any clandestine move to ridicule the state government.

“I can confidently say in my capacity as Oba of Kabba, we are not party to the opposition politics being played here even in health matters. “We do not want Kabba to be a battle field for anybody to display recklessness with covid or to the government. He appealed to the state government to reconsider the decision, explaining that contact tracing, testing can be done without total lockdown.

He described Governor Yahaya Bello as a good and responsible leader whose Character, competence, capabilities and courage have never been in doubt. “We appeal to the Governor to reconsider this because of the hunger and poverty attributable to lockdown”.

He apologised to Governor Bello on behalf of the people, assuring that his people are solidly behind him in his efforts to take the state out of the perpetual slavery it had been subjected to in the past.

“I apologise on behalf of my people to the Governor of Kogi state. We pray that the Governor in his magnanimity w kould graciously ease the lockdown on our people.”

The State Commissioner for Information and Communications, Hon Kingsley Fanwo had earlier told the traditional ruler that the state delegation was in Kabba to verify the claim of the NCDC on the discovery of two cases of the novel disease in the area stressing that the medical team would carry out tests on the residents to ascertain the discovery of the NCDC.

The commissioner further stressed that the exercise was to monitor the current health status of the people who came in contact with the alleged index case, and also conduct random test on the people.

He described as rather unfortunate the uncooperative attitude of the National health body, adding that as a responsible government which is interested in the well being of its citizenry, “we are putting measures in place to control any outbreak and spread in the area”.

The commissioner regretted the role of some of the people of the area whose main interest is to play politics with the health of the residents. While calling on the people of the area to be patient in this period of the lockdown so that the health workers could carry out their work, Fanwo assured that the exercise would be expeditiously, but professionally conducted.