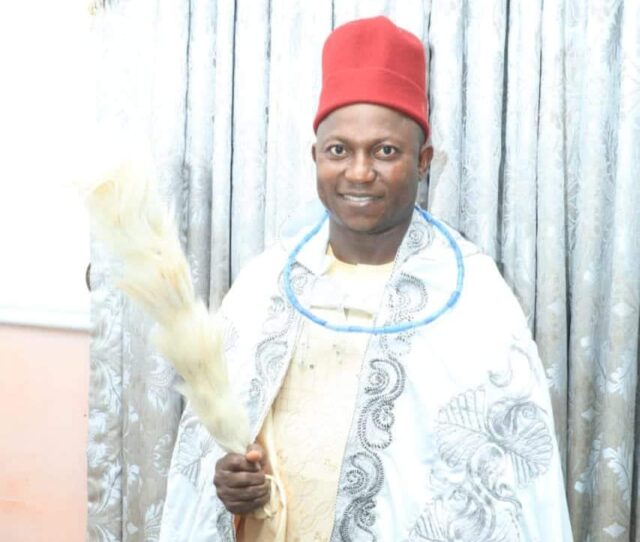 …. charges all Igala sons and daughters to be good ambassadors of the kingdom

The colorful event attended by people from all works of life, was part of the programs to mark the first anniversary of Ata Igala on the throne.

The installation of the new chiefs was in recognition of their contributions to the Igala Kingdom, Kogi State and the nation in their respective professions and fields of endeavour.

The revered Monarch who used the occasion to commend His Excellency, the Executive Governor of Kogi State, Alhaji Yahaya Adoza Bello, for the peace the state, especially the Igala Kingdom is experiencing under his administration, charged every sons and daughters of the kingdom to always preach peace and spread love among themselves and across other divide, as both are the needed vessels for building a virile state and country.

The Ata Igala also encouraged Dr. Usman and other chieftaincy recipients to do their best to ensure that they do not betray the trust he reposed in them as worthy sons and daughters of Igala Kingdom and Kogi State, just as he prayed God to bless their efforts accordingly.

The new Oma Oja Ata Igala, Dr. Salisu Ogbo Usman, left for his home town, Angwa Ogebe in Ankpa Local Government of the state, to present his new title to them and was received by a joyous and mammoth crowd.

The elders at Angwa Ogebe who spoke in turns congratulated Dr. Usman on another lifetime achievement which they described as a manifestation of his immense contributions to the socio-economic development of Angwa Ogebe, Ankpa, Igala Kingdom and Kogi State.

The elders who expressed happiness on Dr. Usman’s new attainment, said it was the beginning of more good tidings for him.

They thanked the Ata Igala and the good people of Igala Kingdom for honouring the Rector, adding that the gesture would encourage and motivate the youths in the area to aim high and strive for excellence in their respective fields of endeavour.

An elated Chief Dr. Salisu Ogbo Usman expressed his deepest appreciation to Ata Igala for the rare honour which has come with a charge and motivation for him to do more in his drive to see a better Igala Kingdom, Kogi State and Nigeria. Dr. Ogbo specially thanked His Excellency, Alhaji Yahaya Bello for finding him worthy of his present appointment.

Chief Dr. Usman who promised to live up to his ‘Oma Oja’ title which means ‘Son of All’ also encouraged the youths and students to remain dedicated, committed and always be on the side of the law and consider their roots in taking any decision in life.

We will continue to do good – Kogi COS Asuku, Assures Supporters In Okene