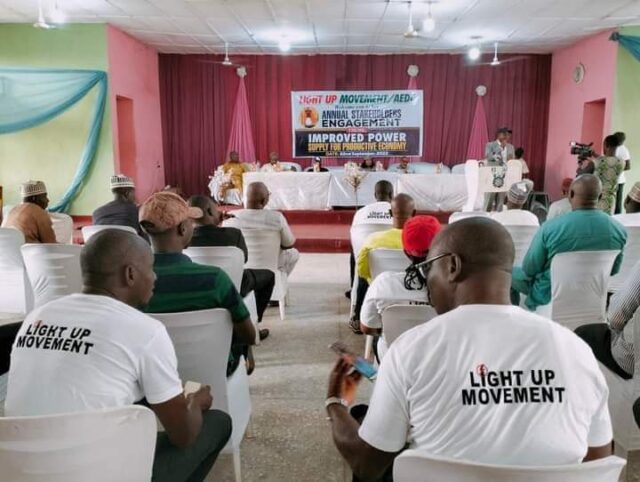 Light Up Movement a group created to help bridge the gap between the Abuja Electricity Distribution Company (AEDC) and consumers in Kogi state has continued on its mandate to ensure effective service delivery from the company and that customers on the other hand meet up with their obligation.

In an event at the Lokoja town hall to mark the 3rd annual stakeholders engagement/town hall meeting, the Chairman of Light Up Movement, Comr Zakari Iliyasu, commended the recent improvement in power supply to the state and harped on the need for stakeholders to work together in ensuring that the gains are sustained.

He noted that the agitation at the first stakeholders engagement centered around the increase of power supply to 8 hours daily, while the second edition was about the increase of power supply from 8 hours to 10-12 hours of supply daily. He commended the AEDC for their recent response to issues and the current improvement from 12 to 22 hours daily.

Iliyasu emphasized on the importance of power supply to the local economy, adding that the essence of this year’s stakeholders engagement was to evaluate the present power situation and chart a way forward.

In his address, the Kogi Regional Manager of AEDC, Engr. Lamidi Obadaki, who was represented by the Head Technical, Engr. Abdul Bashar, commended the Light Up Movement for providing the platform for stakeholders to meet annually to have an evaluation of performances and to address pressing issues affecting customers and the service provider.

He noted that there has been tremendous improvement in service delivery right from 2017 when the platform was created, adding that it is due to her progressive disposition and the desire of the company to meet the demands of customers.

The regional manager further appealed to customers for reciprocity in terms of bill payment stressing that when bills are paid more improvement will be seen in the supply of energy to customers.

He also tasked stakeholders to take the front line in ensuring that electrical installations in their communities are not vandalized, stressing that vandalism creates untold inconvenience for both the company and the consumers. He advised on energy conservation as the way to go given the increase in power consumption.

Former Speaker of the Kogi state House of Assembly, Rt Hon Umar Ahmed Iman, in his message lauded the improvement of power supply by the AEDC. He however called on the management of AEDC to take proactive steps in the provision of prepaid meters to customers across the state, noting that most of the issues raised on unpaid bills hampering the delivery of more hours of light in the state will be addressed effortlessly if majority of the customers are metered.

Speaking also at the event, the Chairman of Lokoja LGA, represented by his Chief of Staff, Hon. Tawheed Abdullahi lauded the efforts of AEDC in recent times while underlying the abnormally faced by citizens in some communities regarding the uniformity of bills to unmetered homes and businesses. He called on the AEDC to look into the issue and provide immediate solutions.

Hon Dele Iselewa, the Special Adviser to Governor Yahaya Bello on Job Creation and SME Development, also urged stakeholders to educate their communities about the dangers of electrical equipment vandalism. He however, highlighted that the state’s improved power supply is in line with Gov. Yahaya Bello’s new direction Blueprint, stated that consistent energy supply will lead to greater job creation, which is a focal point in the Bello administration.

In his goodwill message, Alhaji Zakariya Idakwoji, representative of the Kogi State Council of Ulama’u, commended the leadership of the light-up movement while requesting assistance from the AEDC’s regional manager. He praised the effort of the state government for supporting energy supply to its citizens in comparison to other administrations.

While calling on critical stakeholders to ensure the security and protection of facilities in their communities, the cleric also urged the AEDC to address the issue of illicit light tapping in some neighbourhoods.

Representatives of Artisans and communities at the event took turns to state the issues in their respective domains, while the AEDC Lokoja Area Manager, Mr. Danladi Baba and the Area Manager (Special Project) Ganaja, Emmanuel Ajibogun were on hand to give responses to enlighten and clarify gray areas.