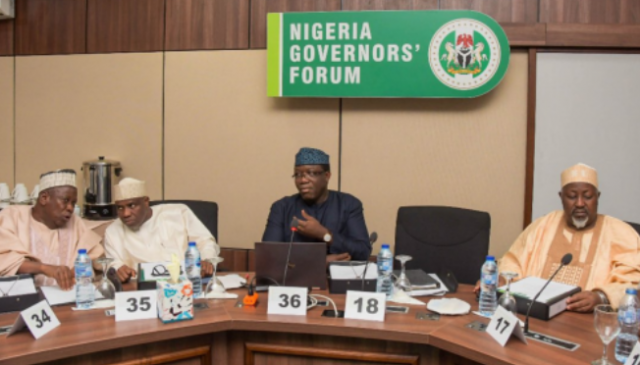 Members of the Nigeria Governors’ Forum (NGF) have expressed concern over the nation’s worsening security situation.

Reacting to last week’s attack on the convoy of the Borno State Governor, Babagana Umara Zulum by suspected Boko Haram members, the NGF’s members said they were appalled by that the situation was degenerating despite government’s efforts.

The governors, who were delighted that Zulum was unhurt in the attack, regretted the injuries sustained by two members of the Civilian Joint Task Force (CJTF) and a police officer attached to the governor’s convoy and prayed for their quick recovery.

Their position was contained in a letter of solidarity written to Zulum by the NGF’s Chairman and Governor of Ekiti State, Kayode Fayemi.

Fayemi said the NGF’s National Executive (NEC) Sub-Committee on Security has scheduled a meeting for Tuesday following which it plans to meet with President Muhammadu Buhari and the Service Chiefs to “discuss this worrisome and rapidly degenerating situation.”

Part of the letter reads: “On behalf of the 36 State Governors of the Federal Republic of Nigeria under the platform of the NGF, I write to express our solidarity with you and the people of Borno State, following the attack last Wednesday, by gunmen suspected to be members of the Boko Haram sect.

“This is one unwarranted attack too many. It epitomizes our collective vulnerability and the fragility of the country’s security architecture.

“Although you emerged from this incident unscathed, we note with regret the injuries sustained by two members of the Civilian Joint Task Force (CJTF)and a police officer attached to your convoy and do accordingly pray for their quick recovery.

“Mr. Governor, Forum members are resolutely behind you in your effort to rid Borno State of these dastardly and wicked agents of evil.

“We are appalled by the worsening security situation in the country generally, in-spite of all the efforts of government to end it.

“On our part, the NEC Sub-Committee on Security will be meeting tomorrow and rising from the resolutions thereof soon dialogue with Mr. President and the nation’s Security Chiefs to discuss this worrisome and rapidly degenerating situation.

“On a final note, Mr. Governor, we thank God for always being merciful.”

Politician of the Year: Yahaya Bello’s Modern Ideologies A Threat to Post-Independence Politicians and...