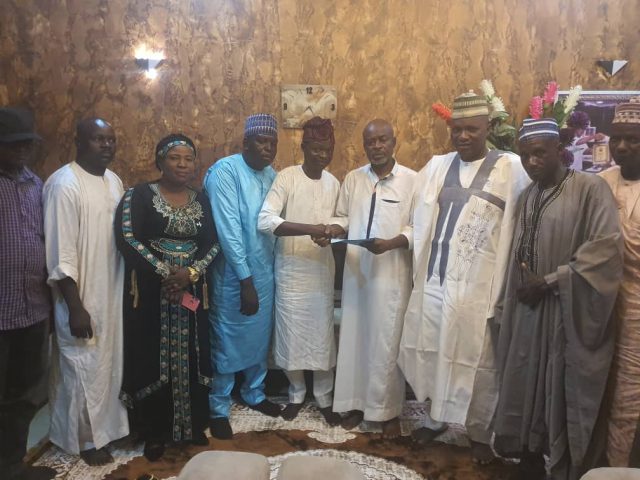 A North Central political group, the APC GYB2PYB Grassroots Mobilisation Ambassadors, have paid an advocacy visit to the former Kogi State Commissioner for Works, Engr. Sadiq Abdulmumeen, assuring him of their readiness to mobilise full support for Governor Yahaya Bello, towards the realisation of his presidential ambition come 2023.

The Leader of the group, Mr Yusuf Agye, told the former Commissioner in Abuja, that they were convinced by the governor’s disposition and consolidated efforts in combatting security in Kogi State, saying his approach was indeed complementing.

”We are convinced by His Excellency’s disposition and consolidated efforts in combatting security in Kogi State, his approach is indeed complementing.

”His zero tolerance to financial cruelty is also an index worthy of emulation. His people oriented leadership style appeal to us.

”His structural and human development if replicated in Nigeria can make a different; his youthful age is an assurance that he can do better and greatly if given the opportunity to steer the affairs of leadership of our great country.

”These and lot more are reasons for our resolution to work for this project come 2023”, Agye said.

He, however said that the group wrote formerly, to queue into this agenda and inform His Excellency, Alhaji Yahaya Bello, the existence and formation of ”APC GYB2PYB Grassroots Mobilisation Ambassadors” within the North Central States in order to project the image and further consolidate on the programmes that will lead to the success of His Excellency come 2023.

”Sir, in view of the above, we have resolved as a group to engage in real advocacy as follows:

”Solidarity visit to Chairmen of Traditional Institutions in the country with FCT inclusive.

”Share solidarity letter of recommendation and supportive of His Excellency to following groups; Traditional rulers across the six geopolitical zones in Nigeria, and critical political stakeholders of reputable character.

”Engage social media worriors to keep projectng the image and the good works of His Excellency until it becomes part of Nigeria.

”We hope our projects and projections will be granted uncommon assent to forge ahead. May Almighty bless His Excellency”, Agye said

In his response, the former Kogi Commissioner for Works, Engr Sadiq Abdulmumeen, commended the group for the iniative, describing the Governor as a pragmatic leader with enormous capacity to bring the much needed transformation and security to the great people of Nigeria.

The former Commissioner noted that His Excellency, Alhaji Yahaya Bello, had made remarkable and tremendous achievements in all sectors of the economy of Kogi State, assuring that he would replicate same and even greater when he takes the mantle of leadership of this country.

He, therefore, encouraged the group to go back and come up with moderate proposals on their planned programmes for possible consideration, sponsorship and partnership.

He also assured them of Governor Yahaya Bello’s readiness to work with any group or organisation with sole mandate of promoting Youth and women’s participation in politics and leadership.

The highlight of the visit was the presentation of their Resolution Letter to the former Commissioner by the leader of the group, Mr Yusuf Agye, followed by a group photograph. (NAN)