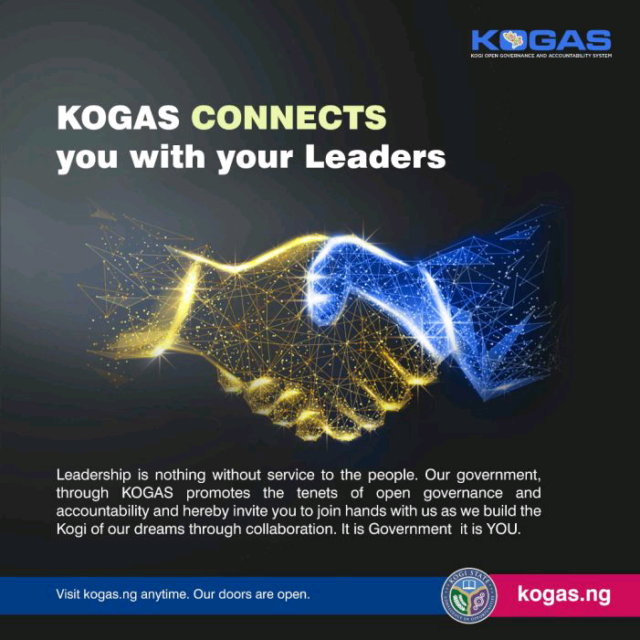 Kogi State government has set yet another record in digital governance by launching the Kogi Open Governance and Accountability System KOGAS, and the Kogi Digital Album aimed at fostering transparency and accountability in governance.

At an event held in government house in Lokoja, Governor Yahaya Bello who was represented by his Deputy, Dr. Edward Onoja said although the state government has been running an all-inclusive administration in which every segment of the society was involved in governance process, the introduction of KOGAS would further broaden the spectrum of transparency and bring the people closer to government.

Bello said it is public knowledge that one of the hallmarks of the New Direction administration in Kogi State is transparent conduct of governance activities, adding that the government is rated by national and international bodies to be one of the most transparent in Nigeria. Aside being back to back winner through meeting the indices set by the World Bank in her States Fiscal Transparency, Accountability and Sustainability program for results, Kogi State is the only state to have scored 100% in the annual evaluation process.

The governor said his administration upon clocking six year on the 27th of January used the anniversary to review their stewardship and concluded that it was ‘so far so good’.

“KOGAS is therefore another layer of my administration’s commitment to open governance and accountability. A responsible government must be outspoken and transparent as possible by ensuring that all functionaries are tasked to heighten responsiveness to citizens in the conduct of all official business.

“The Kogi State Ministry of Information and Communications will deploy KOGAS for round-the-clock live interactions and feedback to and from the public per the standard operating procedures. The ministry will put every part of Government on the platform. It may help those who may want to resist this change to know that KOGAS will also be monitored in real time from my Office through my Chief of Staff via bi-weekly compliance analysis and status reports put together by our Research and Development Unit known as the New Direction Blueprint Team.

“Apart from the Kogi Open Governance and Accountability System, the Kogi State Digital Album and the Confluence Business Directory are also being unveiled today. The Digital Album will be a repository of images with pictures of government activities, programs and projects to tell our stories. The Directory will be a yellow pages for finding businesses operating in Kogi State and enhancing their reach.” Bello added.

He said corruption strives in the dark and it is the character of his administration to discourage opacity, stressing that if every government was run in an open and transparent manner, every citizen would be carried along and there would be no room for corruption in the system.

The Commissioner for Information and Communications, Hon. Kingsley Fanwo in his address said Governor Yahaya Bello upon assumption of office primised open governance and accountability, directing the state ministry of Information and Communications to provide a platform of interaction between the leaders and the led. A directive that has given birth to the Kogi Open Governance and Accountability System, a platform that is the first of its kind by any government in Nigeria.

Fanwo said the platform is designed to be interactive whereby anyone can monitor on the go, government activities, policy implementation and project execution. It also offers citizens the opportunity to asked questions and get answers within 24 hours from various government Ministries Agencies and Departments including the Governor and the Deputy Governor.

Mr. Wole Aguda, the consultant in the project while giving an overview of the KOGAS platform and the Kogi Digital Album said it is one that give room to participatory governance by all and gives the opportunity to have reel of history for government officials and plans for the future. It also gives room for the people to access the documentation of government history, documentation of customs and traditions of different tribes and ethnic groups within the State.

The Consultant who expressed how proud he is to be a Kogite, added that the Government of Alhaji Yahaya Bello has shown that it is indeed the government of the people.

Ayodele John Alonge PhD, CLN, FIIM while delivering his lecture on the zoom network, described the platform as a kind of Wikipedia where you can go to access all kind of information. He added that one doesn’t have to be in Kogi State before he/she can know what is happening there.

Prince Omole said with the KOGAS platform, the people have access to what the government is doing.

He added that KOGAS is a tool that helps Public Administration to be easier and it will help to ensure internal administration is done effectively and that service delivery will be improved in planning and decision-making.

He said since the government and its officials can’t be everywhere at the same time, the KOGAS tool will allow the people communicate with them directly.

The President, Nigeria Bar Association (NBA), Mr. Olumide Akpata while speaking on the topic; “The Right to Ask”, quoted the Freedom of Information Act, adding that it gives everyone the ‘Right to ask’.

He added that government wants her citizens to ask questions in order to ensure their well-being, stressing that KOGAS platform will add to the efforts of his administration on Transparency and Accountability.