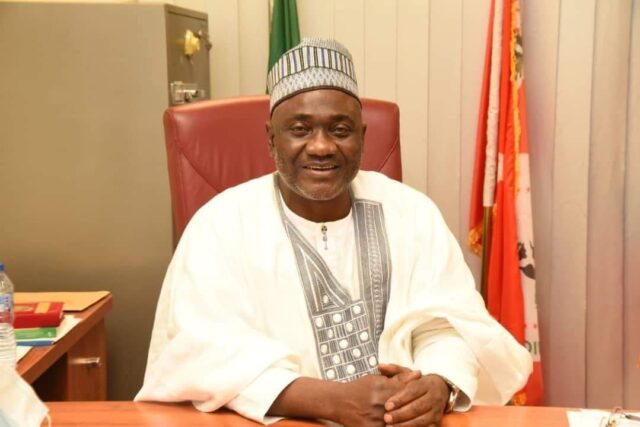 As the 2023 elections approach, several contenders and pretenders are employing various characters to engage in a charade with those with a strong likelihood of capturing power. Senator Jibrin Isa Echocho, a Senator representing Kogi East, is one of the strongest contenders with a good possibility of returning to the Senate due to his sterling qualities and outstanding performance over the last three years.

Recently, the good people of Kogi East have unanimously agreed to return him back to the Senate so that he can continue with the good works he began, a development that has left his rivals befuddled. Instead of employing decent strategies to canvass for support, mischief makers have resorted to cheap blackmail and puerile muckraking, using fake journalists. One of the latest is a sponsored article written by one John Paul with an obnoxious title, “Senator Jibrin Isah Echocho: The Profiteer of Bad Leadership.”

While the writer’s objective is to promote puerile and heartless propaganda for its hired master, the writer also acknowledged Senator Isah Jibrin Echocho’s good performance, particularly in how he spends his constituency allowance. On the surface, one would be inclined to dismiss the writer for his noxious display of ignorance, but such bold ignorance should not be accepted from a man who claims to be a journalist.

In his journalistic misadventure, the writer, who styles himself as “a member of the fourth estate of the realm” and owes his allegiance to “truth” and “loyalty to citizens,” fails many integrity tests. A good journalist is one who is well-versed in history, politics, and governance. He must understand government structures and functions. We recognize, however, that many persons nowadays pose as journalists while lacking the education and abilities required of a 21st-century journalist. Any journalist who touts himself as a dispenser of truth must profess a truth founded on knowledge rather than ignorance. However, because the writer is an example of an ignoramus, the best way to heal him is to get him educated.

Let it be known that Senators’ performance in Nigeria is evaluated based on their statutory responsibilities rather than emotions or sentiments. A Senator’s principal responsibilities include making laws, correcting flaws in legislation (amendment), approving judicial and federal appointments, controlling governmental services, and removing the president and vice-president, among other things. In addition to these primary responsibilities, Senators show love and affection to members of their constituency by touching lives and bringing smiles to the lips of those who voted them through effective utilization of their constituency allowance. The question that every well-meaning Igala son and daughter must and should ask at this juncture is, “how does Echocho fair in all of these statutory responsibilities?”

Many individuals, like John Paul, have no idea how bills become laws. For the purpose of education, a bill is a proposed law or a law in the making. When a bill originates in the Senate, it goes through four stages before it can be considered passed: first reading, where the bill is introduced to the House, second reading, where the bill is actually discussed and the purpose is relayed to the House, committee stage, where a committee is formed for further deliberations on the bill, and third reading, where the bill is passed by a simple majority of members. It should be noted that the time and duration required for a Bill to proceed from first reading to third reading depends on a variety of circumstances, and some Bills take a long time to become law. Senator Jibrin Isah Echocho’s sponsored bills are in various stages of becoming law.

One other truth that the writer is either unaware of or purposefully pretends to be unaware of is that all members of Nigeria’s parliament get constituency allowance. Constituency allowance is to help senators and house of representative members address socio-economic challenges in their immediate constituencies. It is also meant to support local development efforts. Without mincing words, lawmakers in Nigerians, including Echocho are confronted with a lot of challenges and pressure from voters mostly seeking personal and collective needs. This is because there is legitimate overestimation of their wealth. The society, therefore, exerts so much pressure on them almost to their breaking point. In many states in Nigeria and in Kogi East especially, before now, there is no proof that half of the constituency allowances given to members of the parliaments get to the end users and not in private pockets of the lawmakers. How does Senator Jibrin Isah Echocho fair in this regard? There are records that Senator Jibrin Isah Echocho has been performing magic with his constituency allowance.

From the villages of Olufofo, Ejegbo, ofugo down to Inye in Ankpa Local government lighten in electrified stead as the taciturn senator ensured the installation of four 500KVA transformers – a feat considered novel given the painful reality that these villages have been perpetually in darkness following years of total collapse of power supply.

In the same abodeof Ankpa, one of the ancient towns in Nigeria and cradle of ancient civilisation, the media-shy senator made real water improvised initiatives that have today ameliorated the acute water scarcity in Ankpa. Doting the villages of Emere, Emekutu, Mission Street, Erane and environs are solar-powered borehole facilities that now serve the people – a palliative that now addresses the total neglect of water situation in the local government.

Having settled the burden of power and water, the technocrat politician ingrained with boardroom acumen shifted his interventions to human resource development by investing heavily in education and other complementary skills acquisition programs. Chiefly amongst them is the supply of farming machinery, domesticated skills empowering training, particularly in cassava processing technology.

Guided by a strategic roadmap, the senator steered his legislative impact voyage to Ibaji Local Government Area of the state – a place dotted for its agrarian fortunes. In helping to make realities the potentials inherent in Ibaji, Senator Jibrin Isah Echocho manifested responsiveness by constructing an ultra-modern Rice Mill factory in Ejule Ojebe, fully powered with a 500KVA transformer. Harnessed the human resources of the people by having them trained sufficiently in the modern rice processing technologies – of course, not without equipping the healthcare facilities in that place with medical equipment and consumables.

Echocho’s impact-driven legislative vehicle touched down the ancient land of Dekina, one of the largest local settlements in Nigeria. The Acharu Oil Mill, the Skills Acquisition Center at Anyigba, the Alokoli township road, the solar-powered borehole in Anyigba, Dekina, Okete, Odu Anana, the Okete and Ajiolo Ajikpome Health Centers, the Ogbaloto solar powered borehole, and the Lamina bypass road Anyigba.

Ofu local Government, another ancient entity in Kogi state draws reference in the catalogue of senator Echocho’s three years of legislative expedition. Integrated Cashew Processing factory in Ofabo made possible by the senator has become a thriving hub for cashew business in Kogi east. Women and youth in this locale have been exposed to training and empowerment opportunities, especially in agriculture.

A replication of the mentioned legislative interventions of Senator Jibrin Isah Echocho is domiciled in the remaining local government areas of Omala, Bassa, Olamaboro, Igalamela Odolu and Idah where real-time interventions are recorded in pleasant times. The traces of the senator are fascinating, impacting and represent the essence of democratic representation.

Kogi East requires a selfless enigma who can reconcile his ideas and actions. Senator Jibrin Isah Echocho is that enigma that Kogi East needs. Kogi East has a lot to gain returning him to continue with the good works he has started.

2023: Engr. Ohere Most Prepared, Right Person For The Job

Trump card and prospects of a North Central Presidency: positive implications for the geo-political...

Obaseki yet to get official communication of CoS resignation