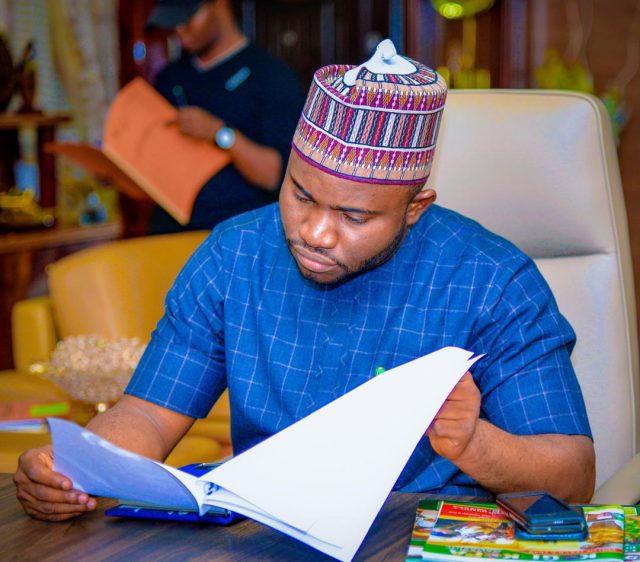 When not at project sites, monitoring state projects and listening to the progress report of contractors, you can predict he is either meeting members of his constituency or sitting behind the desk of his office, flipping quietly through memos or brainstorming on ways to help his boss make Kogi great.

Chief Abdulkareem Moh’d Jamiu (Asuku) is barely past his mid-thirties but he represents the symbol and energy of the Governor Yahaya Bello’s government. Part of the Governor’s stellar recruitment of youth power in 2015, Asuku would soon transcend from a young budding Director of Protocol of the Governor to a major appointee in the government. Today, as the Chief of Staff to the Governor or better put, the governor’s latent eyes, Asuku is the man, tasked with the obligation to sustain the firepower of the government laudable projects.
Sometime, in the first quarter of 2020, at the annual medical outreach of the Pharmacist Abdulkareem Asuku Youth Empowerment Foundation (PAAYEF) in Okene, an interactive session was organized by members of his constituency who were in awe and wanted to show appreciation for his contributions.

PAAYEF has become one of the Chief’s tools to directly impact on the lives of the downtrodden and the underclass in and outside the state. Aside the visible programs of the foundation, like the medical outreaches and the building of boreholes, the aspect that Asuku would later confess he cherished the most is the awarding of scholarships. Over 30 students studying in different tertiary institutions are beneficiaries of the foundation’s scholarship scheme.

During the interactive session, a man who introduced himself as Ibrahim, a lanky fifty plus agrarian asked the Chief on the government’s plan to bring tertiary healthcare closer to the people of the state. He talked on how herculean it was travelling to the state capital to access the only tertiary health institutions in the state – the Federal Medical Center and the State Specialist Hospitals.

When the Chief reeled out the GYB’s blueprint for healthcare, going through the now visible Y-shaped state of the art medical facility sprouting in the state and a Reference Hospital as well, it all sounded like fiction. Attendants at the meeting had reluctantly clapped their hands, finding it hard to believe that these lofty imagination will manifest to reality.

This year, at another PAAYEF occasion, Asuku seized the opportunity to replay the events at the auditorium last year. One man captured it succinctly, “your thoughts are truer than your words’.

The projects are now visible. All that sounded like wild goose tales are now realties spread across the state. There is now an ongoing reference hospital project in Okene. Four ultramodern hospital projects sprouting out, in full lengths and breaths, in Idah, Isanlu Yagba East, Ajaokuta and Gegu Kogi are at the final stages of completion. The administration is also aggressively raising a Teaching Hospital in Anyigba to increase the turnover training time of resident doctors, medical students and other health professionals.

All these mega projects, funded by smart governance initiatives, reflect the kind of sterling brains in the GYB team, of which Pharm Asuku stands tall

This is the man, Asuku, as true as he comes – truthful, purposeful and youthful. I ran into him recently at the project site of a flyover, currently ongoing in the heart of the state capital, Lokoja. Within the initial busts of conversation, it was easy to read the heart of the Chief of Staff, like the deliberate scribbles of an infant on a white sheet. For him, it’s all about projects, jobs and the youth.

He says, “At every state executive council meeting, whatever project we debate about, the first question my principal asks is, ‘how many jobs are we giving our youth with this project?’ if Kogites will not getting jobs from the proposed project(a), we jettison it. The youths are our target. They are the workforce for growth but if you ignore them, they would become the instruments of regression.”

He talked passionately about the GYB’s blueprint, which he readily refers to his guide– the master plan to put the state on a growth curve. When asked why it took a full tenure before the manifestation of the projects, he sighed with a transient smile and said, “You don’t rush in or else you rush out. Instead, you take notes, check what others have done, roll your sleeves and get to work. We did the first three in the first term. Now, we are at work and Kogi State is now a construction site”.

As the GYB harvest of projects spread through the state, many are beginning to see the clouds that herald this gale, Chief Abdulkareem Moh’d Jamiu (Asuku).