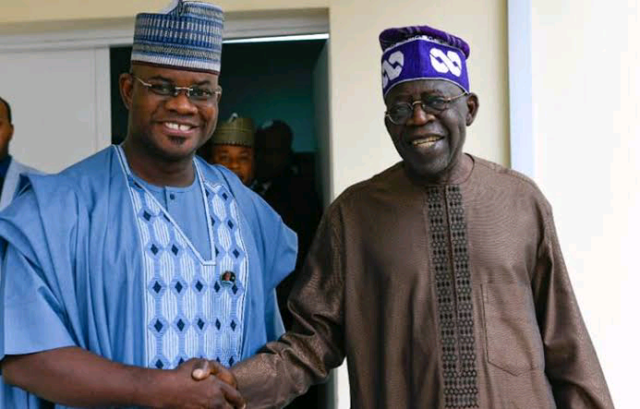 Governor Yahaya Bello of Kogi says he is confident APC and its flag bearer Bola Tinubu will win the 2023 presidential elections not minding the religion of the running mate.

“Whether Muslim-Muslim ticket or a Christian from the North-East or from wherever, I am confident that the party will come up with someone who will concretise the victory we are envisaging,” said Mr Bello, who lost out in the party’s June 8 presidential primary.

He added, “Whether a Muslim or a Christian, we are all Nigerians. It has been long that I have been advocating that we should de-emphasise what divides us and dwell on what unite us more.”He stated this on Wednesday, following a meeting with President Muhammadu Buhari at the State House. He appealed to Nigerians to promote issues enhancing peace and unity in Nigeria.

He was reacting to ongoing debate on who should be Mr Tinubu’s running mate.

“Our flag bearer, Bola Tinubu, is an astute politician that knows the game very well and he knows how to win a contest especially at this level. I am confident that the president, Tinubu, leaders and elders of the APC will come up with a vice-presidential candidate who will sell the party and ensure its victory.”

According to the governor, merit is fundamental to the emergence of leaders at all levels. He said certain challenges confronting the nation could be resolved by people who have the experience and the will to address them.

Mr Bello thanked his supporters, especially youths, women and people living with disabilities, who urged him to aspire for the number one seat in the country.

“Let me use this opportunity to appreciate Nigerians especially youths, women, people living with disabilities, and all the various groups and organisations who have given me support so far,” stated Mr Bello. “I thank you and I doff my hat for you for giving me this courage. I did not lead you astray, and I will never lead you astray. I completed the cycle. I started the journey and I ended it well. Please let us support our party, the APC.”