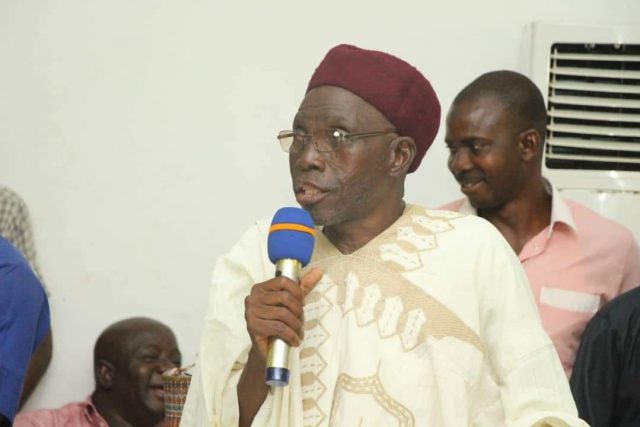 “Just last week, I was about talking on the effects of the Sandy soil of Ankpa on road construction and maintenance when a heavier but sad news of the departure of the real grass root political professor, Alh. Ibrahim LINCO Ocheje (AILO) was announced.

Alhaji Ibrahim Linco Ocheje is the one grass root politician who was in a unique class of his own. He was part of the making of every govt from Apeh Akus era in Benue state 1979, to the present government of governor Yahaya Bello of Kogi State. He wasn’t just a member of each of the Governments but was a major active player. He made governments and he dethroned Governments. His style is simply simple, neglible but it’s effect is perfectly clinical. Neglect him at your own peril. Welcome him even if you don’t like him and the apparently political impossibility turns real possible before your very eyes like a miracle.

He had all the sayings that fit every situation. Sometimes hurting, sometimes soothing. I remember him telling an erring proud councellor in 2001, that he (Linco) is a soldier ant that doesn’t dress anybody but can undress somebody. That councellor never came back to Ankpa legislative council after that tenure.
I remember when sen. NICHOLAS YAHAYA UGBANE visited him the night before 2003 elections. That night he told Hon. Ugbane, of ANPP that “you will win your election but your boss will not win”. Truly, Sen. Ugbane won that election to become a senator while the political giant, prince Audu, whom he earlier brought in 1992 to become governor, lost his bid in 2003 to be a third term Governor.

He was part of the making of governor Ibrahim Idris from Omala and his nine years tenure as Governor. He was there with WADA and present GYB.

Just as he propergated prince Audu in 1979 with the much quoted late STEPHEN ACHEMA statement which was later waxed into a campaign music, ABO WA IGALA, MEJE KA DUNIYI WA TAN OKO LA NO, the same way he opted for GYB against the wish of most Igala people with the contoversial phrase ENEMUNEME. The much hated saying couldn’t have been explained better by anyone than himself who will say no Igala governor gave IGALAs a better deal than GYB. He gave IGALAs a provost in COE, constructed the Ankpa township road, helped in giving the Ankpa central mosque project, which took more than two decades to build, an ultra modern facelift, no governor ever considered an Igala person for deputy and for him as a person, he has never had it better under any governor.

On this three days FIDAU PRAYER, may the soul of Alh. IBRAHIM LINCO OCHEJE (AILO) continue to rest in peace”.