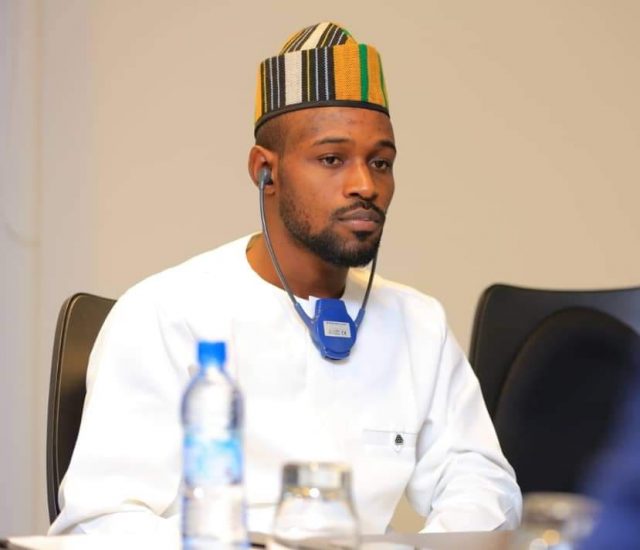 AMBASSADOR OLADELE JOHN NIHI is known nationwide as ‘the GEJ Trekker’ for trekking from Abuja to Otueke in Bayelsa State in solidarity with former PRESIDENT GOODLUCK JONATHAN’s loss of 2015 Nigerian Presidential Election. Since then, he has grown to become a figure known differently from different parts of Kogi State and the country. He is the immediate past Chairman of National Youth Council of Nigeria (NYCN). He courted controversy in Kogi State when he ran for the position of National President of the NYCN in an election that further polarized the body, producing more persons laying claim to the office. He has however relinquished the post and recognized by the body as former President. He made headlines across the state for being one of the figures that opposed the re election of the Governor, little wonder he sent many tongues wagging just few weeks ago when pictures emerged in the social media with him in warm handshakes and embrace by GOVERNOR YAHAYA BELLO and his Chief of Staff, PHARMACIST ABDULKAREEM JAMIU ASUKU despite the fact that he was known as one of the closest allies to SENATOR DINO MELAYE whom he actively supported in the 2019 General Election. It was that curiosity that sent InsideStory reporter, MOHAMMED YABAGI to try to find out what had transpired to the extent of him trying to mobilize Nigerian youths to support Governor Bello for President in the next dispensation. Excerpts:

Who is Oladele John Nihi?

I am a native of the famous Cocoa and Coffee hub, Ayegunle Gbede in Ijumu Local Government Area of Kogi State. I was born to the family of Late Chief J. O. Nihi some decades ago. I scaled through all the stages of education with a Bachelor Degree in Political Science from the prestigious Kogi State University, Anyigba. And a Master of Science (M.Sc.) Certificate in Peace Studies and Conflict Resolution, from the National Open University of Nigeria. I have been very active in the affairs of nation building, continental development, and interpersonal growth. For years; I have dedicated my life to sensitization programs and youth advocacies initiatives. I am well known for my achievements across the country and Africa at large. Also known as the “GEJ Treker” (a nickname I bagged for trekking from Abuja to Otuoke in celebration of Former President Goodluck Ebele Jonathan in 2015, for his decision to handover power to President Buhari without bloodshed). I am currently the Commissioner for Youth Political Participation, Pan-African Youth Union (PYU), and immediate past President of the National Youth Council of Nigeria (NYCN). I am also the President and Executive Director of Youth Rebirth Advocacy & Sensitization (YORASI). Before now, specifically from 2017 to 2018, I was Chairman, National Youth Council of Nigeria, Kogi State Chapter. And was also Head of Information Technology; office of the Senior Special Assistant to the President, on Youth & Student Matters, from September 2013 to January 2015, during President Goodluck Ebele Jonathan’s administration. This is only to mention few of the numerous positions I have been opportuned to serve.

Tell us what informed your decision to return to Gov Yahaya Bello fold?

During my tenure as the Chairman of NYCN in Kogi State, I enjoyed a robust relationship with His Excellency Governor Yahaya Bello and key members of his cabinet. My decision to go back to GYB’s camp is to further contribute my quota to the upliftment of my dear state. No man can fight a Government, because a Government is an institution of its own. GYB was and still like a father to me while I worked closely with him as the Number One youth in Kogi State. The relationship is dear to me, hence retracing my steps becomes sacrosanct. The thing is, I love the Governor, I made a political calculation that I have to retrace. It is the right thing to do.

People believe your decision to leave in the first place was informed by greed or something. Can you set the records straight?

People are entitled to their opinions, but truth is I decided to leave because I felt hurt and betrayed my those I majorly referred to as friends and close allies. I was stabbed right in the face by people I once called “family”. The Governor himself played a minor role as to why I had to tender my resignation as the state’s NYCN Chairman. Though I was heavily stunned by the Governor’s decision on his refusal to water my ambition of becoming the President of the National Youth Council of Nigeria at the Gombe Congress in 2017 and felt I should be the one the Government and the Governor should support and not any other. This led to the hasty decision that eventually translated to my resignation, not knowing that His Excellency has better plans for me. I have realized that now and I am back for the better. The Governor is a mentor and wants the best for all vibrant youths of Kogi State; including me.

Tell us about your project called GYB to PYB origin and what you intend to achieve and how?

It is no longer news how youths across the country have been recently moved to take issues regarding governance more seriously. For almost the first time in the history of our country, we all witnessed youths protesting against marginalization in the aspect of youth inclusiveness in the country’s corridors of power. Governor Yahaya Bello, being a young and experienced politician, fits perfectly into the attributes needed for a youthful President come 2023. Already we have a group called GYB2PYB Youth Support Group that has been designed to carefully drive the objectives and goals to see that His Excellency emerges as President. And of course, the “How” is what I wouldn’t want to reveal openly for some vital reasons. But I can tell you categorically that we have at our disposal, all it takes to see this dream birthed as a reality. So, for now, lets keep our fingers crossed.

Gov Bello’s aspiration for Nigeria’s Presidency, is it achievable? How?

Yes, it is achievable. I would still plead to hold on to the “HOW”. The reason is the same as the previous question.

What is your view about Politics and Governance in Nigeria today?

Politics and Governance in Nigeria is taking a whole new dimension, judging by the recent happenings across the country; where youths are now more interested in issues that has to do with the country. Gone are the days when nobody asked questions. We now have lots of questions to ask. I can say that democracy is finally being reformed. We are in a new season, and the oceans of power are getting dredged on a daily basis. The youths are getting it right.

How can we achieve youth and women inclusion in governance in Nigeria?

The answer to this is simple. Governor Yahaya Bello has provided a roadmap for Youths and women inclusion in Governance. If you take your time to study the activities of His Excellency, you would not have to ask this question at all. The just concluded Kogi State Local Government Election; where the Vice Chairperson in the 21 Local Government Area are all women, and mostly youths is enough proof. So, Governor Yahaya Bello remain the only Nigerian Politician who has the answer to this question.

Why did you have to abandon the Dino Melaye Camp after 2019 polls?

Senator Dino Melaye remains a vibrant Politician whom I hold in good regards despite our current political differences. My decision to leave his camp was in the best interest of Nigerian Youths, my constituency, and State. Governor Yahaya Bello’s good intentions towards Kogi State, and of course youths political career is something I am not willing to trade, and it will really be great to see Senator Dino and other Kogites irrespective of Political differences come together to support the state government.

What should Nigerians look out for in the next dispensation?

The only thing we are to look out for is an inevitable change. Power will change hands; not necessarily from one Political party to another, but for one generation to the other.

What is your advice to Kogi and Nigerian youths?

My advice would be that youths should always look out for opportunities to contribute their best quota to nation building because it is through togetherness that a broom could sweep the floor. We youths should stay more united, focused, and committed to see that the change we all want is truly actualized.

ASUU meeting with FG end in deadlock, strike to continue

2023: Kogi COS charges youths to take power through democratic process