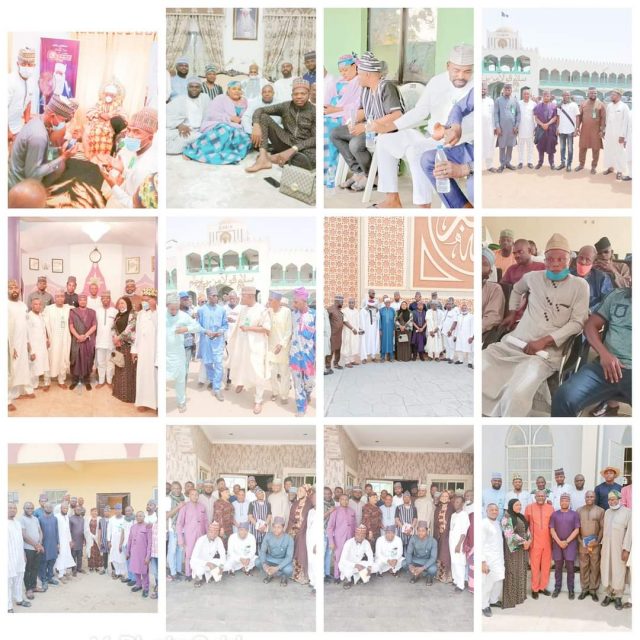 From Niger, Kwara, Nassarawa and Benue States, the Senior Special Assistants (SSSs) to the Kogi State Governor, Alhaji Yahaya Bello Plateaued in Jos to complete their national tour which began in the North Central Geopolitical Zone, which Kogi is part. Their message was the same – that the region must continue to play its role as the melting point of the country, uniting the increasingly threatened bond of the nation and give massive support to Governor Bello to become President of Nigeria.

Their argument was compelling. They pointed to many issues that threaten the infrastructural, economic, security and other sectors in the country, things Kogi was already taking for granted.

One of the first Traditional Rulers to receive the team outside Kogi State was the Etsu Nupe, Alhaji Yahaya Abubakar who applauded Governor Bello for the bravery he displays in his leadership style, stating that he addresses issues with surety and authority as true leaders should. For him, the Governor is a young with the heart of gold and commitment to leadership through doggedness. He therefore said he would pray for the ambition to have Bello as next President succeed.

The Etsu Nupe, who stated that Governor was an informed man and understands the intricacies of governance and the authority that leaders should have, applauded him for the policies of his administration so far, especially as it also concern youth and women inclusion. He noted that Kogi and Niger states share many commonalities, ranging from ancestral and cultural make-ups, hence the need to encourage Governor Bello, being a young leader who understands the times and what it takes to lead.

Chairman of the Forum and Senior Special Assistant to the Governor on ICT, Hon Ismail Umar had earlier expressed gratitude to the Etsu Nupe for granting them audience and informed him that they were in his domain as his subjects to solicit for his blessings towards the ambition to have Governor Bello emmerge the nation’s number one citizen in 2023. He said both Kogi and Niger are of Kwararafa heritage which is why they need one another, noting that no Governor has given the youth the opportunity that Governor Bello was giving to them.

The suggestion for the Governor to vie for the exalted position, he informed the royal father, was mooted by some youths across the nation, saying the agitation has continued and that it was time for every leader of good conscience to get involved. He emphasized that Governor Bello is a Governor that is interested in the security and unity of the country, hence the need to have his type at the helm of the nation’s affairs, especially given the current trends in the country.

Determined to ensure they reach all stakeholders and solicit support for Governor Yahaya Bello for 2023 presidency, the forum urged their colleagues from other states and other groups to back the Governor. They therefore further held another meeting with Inter Tribal Groups in the federation resident in Niger State.

The Forum told their colleagues that Niger and Kogi shared common sociocultural, genealogical and political ancestry, hence the need to cooperate for the progress and development of Nigeria, using Yahaya Bello as a poster child. He used the occasion to enjoin his colleagues to look at the security challenges in the country, especially Niger state, saying Kogi is singing a different song because of the priority that Governor Bello has placed on the sector. Hon Ismail further stressed that youth and women involvement, inclusion of the vulnerable in the society and other neglected groups was a pointer to the commitment of the Governor to do things differently and pave the way for a more united, secured and developed Nigeria beginning from his home state of Kogi.

Responding, the Chairman of the Forum of Senior Special Assistants in Niger State, Hon Katuka Ahmed praised the decision of his colleagues to pay them the visit and praised Governor Bello for his foresight and youth inclusiveness in governance. He was however quick to remind his Kogi State colleagues that his Governor, who is relatively also a youth, has also included the demographic in his policies and programmes. Hon Katuka noted that women, youth and the vulnerable members of the society have also had their fair share in the government of current administration in Niger State.

Earlier in a strategic meeting with the leadership of the Inter Tribal Groups and the Ebira People’s Association in Niger State, the SSAs Forum urged them to back the Governor having done so much for groups similar to theirs and based in Kogi State to advance their cause. The Senior Special Assistant to the Niger State Governor on Political Matters, Hon Salihu Ahmed who is from Kogi State used the occasion to praise his state Governor for the manner of his administration, stressing he would mobilize necessary support for the presidential bid.

He said he was proud as a citizen of Kogi State in view of the pride Governor Bello has brought to the state since assumption of office.

The President of Inter Tribal Groups in the state, Mr Wilson Orukpe; the Secretary, Mrs Gloria Dopsel; the Organising Secretary, Mr Suleiman Ahmed; the Youth Leader, Ma’aroof Abdulyakeen and others pledged their commitment to the cause even as they prayed for the success of the movement.

In Kwara, the Emir of Ilorin, Alhaji Ibrahim Sulugambari was convinced it was time for the Youths to run the country and that Governor Bello fit the bill of the young ones needed to take the nation out of the shackles it has found itself. He even offered his advice and suggestions on how best the group should go about in canvassing for support for the Governor who he described as a son. In fact, he wants everyone in North Central Geopolitical Zone and the north at large to give maximum support to the Governor to succeed.

For the Emir, the time for the Youths to run the country is not better than now, just as he indicates his preparedness to back Kogi State Governor, through prayers and blessings. He even told the SSAs to pray fervently for the cause to succeed for the betterment of Nigeria.

Alhaji Sulugambari said Nigerian youth need to take the bull by the horn and follow the leadership path being created by Governor Bello, who he said, has all the credentials necessary to run the country successfully as a young man just as he has done in the Confluence State. The Emir who was full of praise for the way the Governor has tackled many sociopolitical and infrastructural challenges that bedevilled Kogi state, described the Governor as a worthy son who is making the North Central Geopolitical Zone proud, especially in the way he has tackled the problem of insecurity in Kogi State.

“I support this cause for Governor Yahaya Bello to become President in 2023. I am ready to contribute my quota through prayers and I urge you all (the SSAs) to also join in praying fervently for the success of this endeavor. Tell him I am one hundred percent behind him because his success is also our success. Don’t stop only within the neighboring North Central Geopolitical Zone, take the campaign to the entire 19 Northern States and the country at large. If you do that, I am very sure that he will succeed by the grace of God. I believe he can do it and he will do it.”

The Chairman of the forum had earlier informed the Royal Father that they were in his palace to seek for his fatherly prayers, support and admotion, as well as urge him to reach out to other traditional heads and political stakeholders in Kwara State and beyond on the need to back Governor Bello for 2023. He said the Governor has been a symbol of Nigeria’s Unity, Peace, Progress and development with the policy statements, postulations and general ambience since his emergence as a young leader in the country. The forum then thanked the Royal Father for the support and hospitality they enjoyed, and prayed for continued productive relationship between Kogi State and Ilorin Emirate as well as Kwara State in general, even as he admitted they shared similar ancestry.

For the Jannatul Nasril Islam (JNI) in Kwara State and aides to the Governor, Governor Bello’s candidature was a perfect one that everyone of good conscience should support. Speaking for JNI, Hon Justice Salihu Muhammad, who is a former Grand Khadi of the State, described Kogi as his second home in view of the long history he has with the state, adding that he had no doubt in the ability of the Kogi State Governor to clinch the position in 2023. He said he understands that Governor Bello meant well for Nigeria just as he had been told by a cabinet member of the state before now, saying he had confidence the country would move forward and have many of its challenges addressed if he becomes the President.

According to the former Khadi, Governor Bello is a neat, articulate, serious and development oriented individual, who is young and not afraid to face problems headlong, saying the naton need a such a character to lead it. He encouraged the Governor and his supporters to keep their heads above waters and not listen to distractions because many are also interested in leading Nigeria in 2023, saying it was necessary for him to keep his eyes on the ultimate price rather than listen to detractors. “Tell him to keep up with the struggle. He should keep on doing good things and continue to be transparent, generous and prayerful because it is only through prayers that he can have his wishes met by the Almighty God,” the religious leader said.

He said the nation needs someone like Governor Bello to run its affairs, adding that his resume is a public knowledge and thus the need for his caliber to be given the opportunity to run the country.

Among the basis that anchored their assertion is the issue of the pervasive insecurity the nation is grappling with. The Governor has put machineries in place to nip the situation in the bud and Kogi State was better for it as citizens could go about their legitimate activities unhindered by hoodlums, kidnappers, bandits and other elements that threaten the security of other states.

They want Nigerians to give their support to allow the Governor run and replicate same in the entire country and bring about national cohesion and development.

The SSAs also highlighted the fact that Bello is a youth who understands the place of governance among the next generation of leaders. He has also brought together young people, gave them responsibility as aides and pushed others to vie for political offices and are having positive impact in the positions of responsibility they occupied. The Future, the group believes, belongs to the youth as they understand the times and intricacies involved in running public offices. The Governor is therefore facing situations with bravery and demonstrating capacity to make the nation better, beginning from Kogi which is one of the most complex states in the country.

To the Governor’s aides, the nation needs unity of purpose and direction which gives all the federating units sense of belonging with Governor as torch bearer. He is uniting the many religious units that make up Kogi and giving every group what they need to be assured of their interest taken care of. For the first time, Kogi State Government House has a Church building while both Islamic and Christian Organised bodies have structures built for them to give them befitting places for work.

The interreligious council in Kogi is one of the most vibrant in the country, paving way for many inter – Faith groups from other parts of the country to copy the Confluence State.

Governor Bello, they told their guests, has shown commitment to building a virile Nigeria where the children of nobodies could become sombodies without necessary knowing anybody.