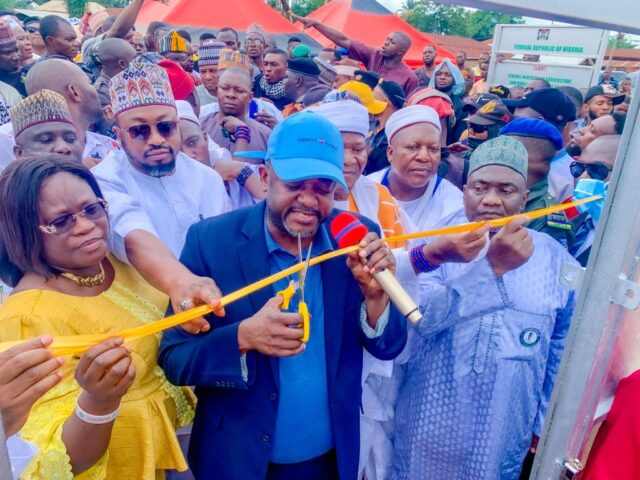 …says I Am Very Proud Of Echocho

He gave the commendation during the commissioning of projects which include the rehabilitation of the moribund Palm Oil Mill in Acharu-Egume, the establishment of a Skills Acquisition Centre in Anyigba, Dekina LGA, and the commissioning of a rice processing centre in Ibaji LGA of the State.

State Deputy Governor, Chief (Dr.) Edward Onoja who represented Governor Bello lauded the Lawmaker, describing him as a clear deviation from his predecessors in terms of strategic projects targeted at enhancing economic and income value of his constituents.

He said despite being a first-timer at the Red Chamber, Senator Echocho is championing the upgrade of various people-driven projects across Kogi East, saying he utilizes his experiences in the private and public sectors to make his years in legislative business memorable.

Remarking, Senator Echocho promised to continually deliver on his mandate at the National Assembly. He appreciated Governor Bello and his Deputy, Chief Onoja for supporting his quest to serve the people of Kogi East, promising not to jeopardize the confidence reposed in him. He enumerated about 5 more similar projects underway in Omala, Ofu, Ankpa, Omala LGA’s.

Earlier, Chief Onoja led top government functionaries, stalwarts of the All Progressives Congress in Kogi East, and other esteemed guests to the palace of the Onu Egume, HRH Etila Ajeka where he commiserated with the royal father over the demise of his wife.

power generation to the national grid increases to 3,876.9MW on Monday – TCN

Dino Indicts Top Government Officials, Security Agents As Those Behind His Recall Move