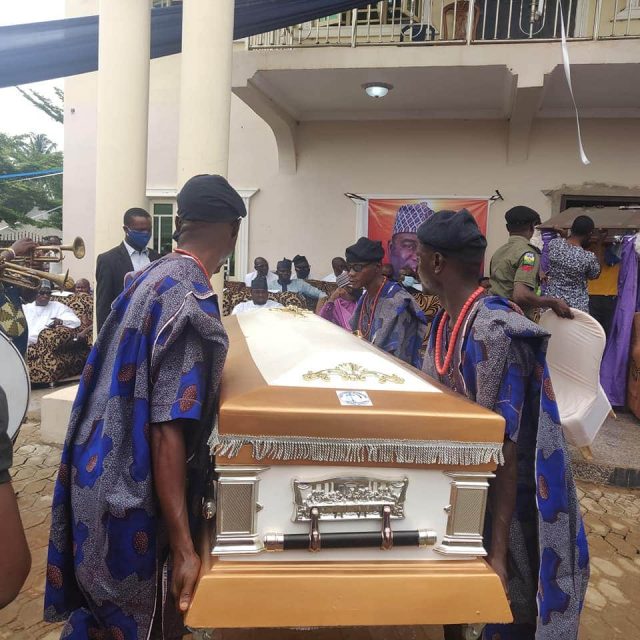 It was a moment of grief amid eulogies at Ejule – Ojebe in Ibaji Local Government Area of Kogi State where deceased lawmaker from the area, Hon John Abah was buried amid tears.

This is following a wake that took place at his residence in the community on Friday which was attended by his colleagues, members of the National Assembly, traditional rulers, former and serving political office holders from all parts of Igala land.

Speaking during the burial held on Saturday, Kogi State Governor, Alhaji Yahaya Bello eulogised the late lawmaker for his dynamism and passion in the discharge of his duty while he was alive.

Represented by his Deputy, Chief Edward Onoja, the Governor described late Hon Abah as a man that was dedicated to attracting development to his people through important motions and resolutions, and described him as a dedicated politicians concerned with the progress of his people.

Governor Bello also used the occasion to appeal to citizens of the state to pray to survive year 2020 as that is the major objective because of rampant deaths recorded this year.

He urged the people of Ibaji to bury their differences and embrace one another in Unity, adding that it was only through unity of purpose that the dream of the deceased John Abah for the area would be fulfilled.

The Governor said his administration is a progressive one which believes in looking at ideas that would bring to any part of the state objectively and promised to look at Late Hon Abah’s dream of having a Rice Milling Factory in Ibaji.

Earlier in an address, the Speaker of Kogi State House of Assembly, RT Hon Matthew Kolawole had also praised his late colleague for his contribution to the growth of the legislative arm of government as a two – term lawmaker and prayed God to grant him eternal rest.

He also prayed the Almighty to grant the family fortitude to bear the loss.

In their separate remarks, the members representing Idah and Dekina/Bassa Federal Constituencies at the National Assembly, Hon David Zachariah and Hon Hassan Abdullahi both paid glowing tributes to the deceased lawmaker.

Other speakers, including the Ejeh and Onu Ibaji, Chief John Egwemi, brother of the deceased and other guests at the occasion also paid glowing tributes to the late lawamker and prayed God to grant his loved ones fortitude to bear the loss.