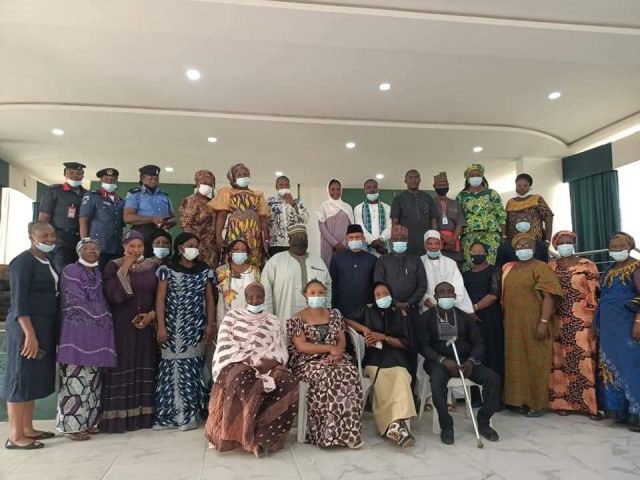 The place of women in the society has gone beyond being caregivers and home makers. Their roles have grown to become strong fulcrum that anchor sociopolitical, economic and administrative growth for proper functioning of the environment. Little wonder the United Nations (UN) has included gender balancing and women inclusion in governance as an important factor necessary in measure sustainable developments in many countries of the world, especially in the developing world.

To this end, the office of Kogi State Special Adviser on Sustainable Development Goals (SDGs) in collaboration with the Civil Society Organisation, Mercy Corps held a roundtable discussion where; “The role of Women in Peace Building and Governance in Kogi State” was x – rayed. The event which had in attendance, the SDGs Special Adviser to the Governor, Hon Nasir Ohiani, the state Commissioner for Information and Communication, Hon Kingsley Fanwo and his counterparts from the ministries of Finance and Economic Planning, Hon Asiwaju Asiru; while Commissioners in ministries of Justice and Women Affairs had representatives as did the State Commissioner of Police and Commanders of Nigerian Security and Civil Defense Corps and others.

The programme had, as part of its core areas of interest, the place of women as peace builders and sustainers of tranquility in a contemporary society, to foster egalitarianism and development. It also informed the decision to highlight that the more priority given them, the better empowered they are to contribute to society. This is in addition to their natural disposition towards ensuring compassion towards others.

In his opening address, the Special Adviser to the Governor for his pragmatic role in ensuring women inclusion in governance and leadership across the state, insisting it must be sustained if Kogi was to continue to blaze the trail as champion of affirmative action in the country. He noted that the roundtable discussion was very important for the state government towards making Kogi the safest state in the country and that women as agent of change is not a new concept and so the meeting was another effort to deliver action plan towards building policies that would sustain the place of female gender in governnace for the state’s development.

Ohiani said the program was to enable the women air their voices so that the state could harmonise and fashion out policy that would support their courses. “The pointer has show that Kogi state in a very short time will achieve the SDG 5 of granting Equality to women. The state governor, Yahaya Bello has demonstrated this with the appointment of women into critical leadership positions. The Secretary to the State Government is a woman, the Head of service is a woman, the chairpersons of the 21 council area are women, amongst other key positions. Suffice to say that the governor has done beyond the 35 percent affirmative action for women in Kogi State.”

“Therefore, today’s program will enables the women aired their voices so that will can chart and implement policies that will make women equity possible. Our idea is to empower 30,000 women at the grassroot level of all the 239 wards. That is why we are partnering with organization like Mercy Corp whom are doing Community Innitiatives to Promote Peace (CIPP) in four of the council areas.”

Ohiani however urged other civil society groups to partner with the stage governmemt towards her drive of achieving equality and economic empowerment for women in leadership positions.

On his part, the state commissioner for Information and Communication, Hon Kingsley Fanwo said women are crucial to a peaceful society, and urged them to rededicate their lives to peace building. He noted; “When women play their role effectively, there will be peace; such as it’s witnessed in Kogi State. The governor of the state had invested hugely in security, but beyond that, women are the practical reasons that make peace possible in the state.”

Fanwo therefore reiterated that the state government would continue to place emphasis on the economic empowerment of women as they are key to the success of governor Yahaya Bello’s adminstration.

Speaking, the Deputy Chief of Party, Mercy Corps, Sanni Suleiman who doubles as the coordinator of the CIPP project, urged the three tiers of government to always involve women in critical positions as they are key to sustaining peace. He emphasised that women must be given the rightful position as the population of women is almost 50 percent in the society of today. He stressed that there was no way any system could take decision by neglecting 50 percent of its population.

“We need women to drive governance and peace building. Therefore, there is need to improve the capacity building of women and provide program geared towards elevating and empowering women beyond mere holding offices. Women must occupy leadership position so that they can be empowered to play critical roles in peace building.”

Responding to an interview the chairman house committee on women affairs Hon. AbuBakar Tanko said his hands are open to sign in on whatever contribution that has to do with women empowerment and capacity building in Kogi and Nigeria at large.

In his contribution, the State Chairman of Jannatu Nasril Islam, (JNI), Ambassador Usman Bello however urged the Federal government to emulate the Kogi State government template that has fulfilled the 35 percent women affirmative at the national level. He said Islam supports women empowerment and that his Organisation has regularly taken steps to ensure they are protected in all facets of life.

On her part, the representative of Christian Association of Nigeria (CAN) described the women as the most powerful creation of God, whose circumstance of existence was special. She referred to one of the Bible characters, Mary Magdalene, who was among the ardent belivers in Jesus Christ when he told them he would resurrect after crucifixion.

She said women were natural leaders in any given setting and that they were brave and could do great exploits if given the opportunity. She therefore applauded the Governor for continuously giving opportunities to women to occupy positions of trust. She therefore said the aplause that have come for the Governor from far and near were deserving.

The roundtable discussion which released a communique at the end, also praised Governor Bello for the manner he has been able to involve women in the state in the running of the state’s affairs. The document observed that Kogi State government has raised the bar on inclusion of women at the local government level through the election of 21 Vice Chairperson and 21 House Leaders in all the councils of the state. It then noted further that there has been several interventions of the state towards empowering women at the grassroot to make them self reliant through economic empowerment.

“The State House of Assembly has recently passed the Violence Against Persons Prohibition (VAPP) Bill which provides a legislative platform for promotion, protection and enforcement of the rights of vulnerable persons especially women and young girls. There are still gaps in the number of women in state level governance especially in the elective positions where no woman is represented. There are still issues around policies towards sustainable inclusion of women in governance in the state.

“There is no mechanism for gazetting passed Laws in the State thereby rendering those passed ineffective. The Office of the Sustainable Development Goals (SDGs) has put in place laudable mechanisms aimed at ensuring women participation and inclusion at all levels in line with SDG 5.”

The communique then recommended that there is need for government and its agencies to develop and enforce strategic policies and programmes aimed at opening the spaces for women and other vulnerable persons in governance. Economic empowerment strategies must be consciously thought out and implemented to provide a mechanism for empowering women. There is the urgent need to give assent to the Violence Against Persons Prohibition Bill (VAPP) by the Executive Governor. The need to gazette all laws passed at the state level. There is need for the State government to provide trhe necessary resources needed by the SDGs office to implement their laudable initiatives for women and young girls in the state.”