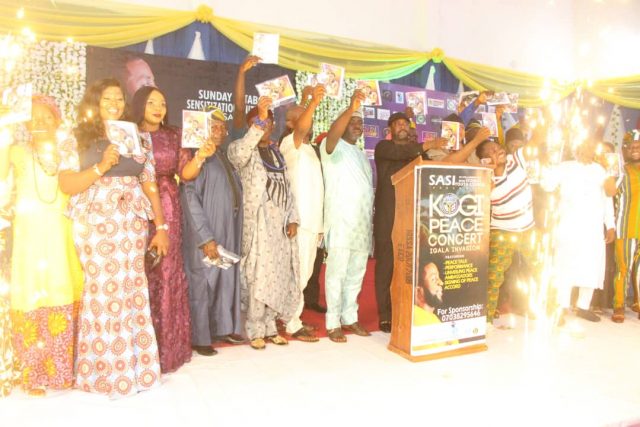 Politicians aspiring for the November governorship election in Kogi State have on Saturday assured the people of their commitment to ensuring peace throughout the electioneering process.

They gave the assurances in Anyigba in their separate remarks during the first Kogi Peace Concert held at the Auditorium of Kogi State University, Anyigba.

Speaking at the event, the state Governor, Alhaji Yahaya Bello reminded the people that just as he was not enthroned through the barrel of the gun, he has no reason to train assassins or encourage thugs for the purpose of the election.

The Governor who was represented by his Chief of Staff, Hon Edward Onoja said he has committed himself to peaceful coexistence among citizens of Kogi State hence his unwavering commitment to fight all forms of criminality in the state despite the herculean task in achieving one hundred percent crime – free society.

He called on politicians to go to the electorates and remind them of their antecedents saying such criteria is a yardstick that many electorates use to determine the candidate to support and not the level of propaganda they churn out in the media, especially the social media.

The Governor called on parents, teachers, religious leaders and other caregivers to preach good morals to their wards in accordance with the teaching that the way a child is trained to go is what such child would abide by for the rest of his life.

In his own address titled; The Role of Police in Ensuring Free and Fair Election, the state Police Commissioner, Hakeem Busari said it is only the sincere commitment of stakeholders that ensure the success of every election anywhere.

He said ordinary citizens, the judiciary, media practitioners, civil society, the police, political parties, politicians and other stakeholders have critical roles to play in every electioneering process.

The commissioner expressed concern over the high rate of insecurity that characterised elections in Africa and said such ugly development has necessitated the need for the police to get more involved in elections to ensure peaceful transitions.

He said the police is the only institution constitionally tasked with the responsibility of getting involved in civil activities as important as an elections, hence their prominent role in every democracy.

In his peace message at the occasion, the National President of Igala Cultural Development Association (ICDA), Alhaji Abubakar Sadiq Amodu admitted that no society is without a conflict, but that it is the ability to resolve it peacefully that determines the level of peace therein.

He said Peace in Igalaland in November governorship election is not negotiable, and expressed regret that a few of the target audience for the event were absent and then enjoined the youths to go back to the past when politics was played with more maturity where people embraced each other irrespective of their political leanings.

Convener of the event, Mr Sunday Atabo in his opening address said the occasion had become imperative in view of recent security concerns in parts of the state in the run up to the November governorship election.

He urged the youths especially to see each other as brothers and embrace peace as such action would encourage development in the society rather than taking arms against one another.

On his part, Ambassador Tosin Adebiyi described the youths as the brains of the society, adding that they are the microchips that make the society function well hence the need to give them the enabling environment to function.

Ambassador Adeniyi further praised Sunday Atabor, the initiator of the Peace Concert for his dedication to peace while further describing him as an exemplary man to many youths in the entire west African subregion.

Top artists from the state reeled out hit songs and performances with peace and violence – free themes to the admiration of the guests that graced the occasion. Also present was Ace Nollywood actress, Jummai Joseph among other notable entertainers of Kogi State origin.

A short movie which centred on peace and the need to eschew political violence was also launched at the event.