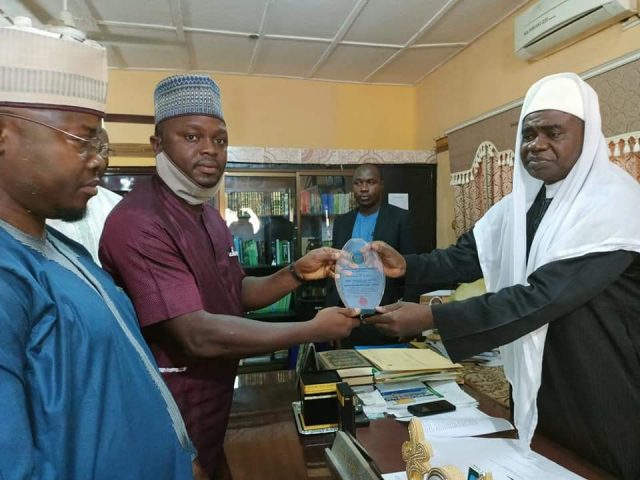 The Kogi Youth for Good Governance Ambassador has conferred an award on the Grand Khadi of the State, Justice Abdulkarim Aruwa.

The Award was conferred on him today in his office at the Sharia Court of Appeal, Lokoja.

Presenting the award, the group’s Chairman, Emmanuel Ayo said the award was in recognition of Justice Aruwa’s selfless service to humanity and the love and support he has continued to the less privileged.

He said they found out, through painstaking research that the Grand Khadi is not just a man of brilliant knowledge of the law who has aplied it justly in all cases he has taken charge of, but also a man that is passionate about societal development and youth empowerment through education.

The Chairman stressed that youths in the state need an accountable leader who operates an open door policy in the discharge of his duties, adding that it is only such leaders that can bequeath good future on the next generation and make society better.

Justice Aruwa in his acceptance speech, applauded the group said he was not the type that accept recognitions as several entrieties have been made to him by groups to be honoured which he has turned down because he preferred to be recognized by God, rather than man.

The State Sharia Court head who said the youth demographic of the association also contributed in convincing him to accept the award, said he was a member of the Muslim Students Society (MSS), a body he will never graduate from as long as he lived.

He expressed gratitude to the Governor of the State, Alhaji Yahaya Bello; the management and staff of the state Sharia Court of Appeal and the entire state for creating the enabling environment for him to function, and promised to sustain the virtues that attracted him to the group as worthy of the award.

In their separate good will messages, other Justices of the State Sharia Court and the Registrar, all described Justice Aruwa as a transparent, accountable, equitable and just leader who has the fear of God demonstrates it in all his conducts.

2023: Yahaya Bello Has A Duty For The Libration Of Nigerian Youths and Women

South Africa and Senegal must replay their World Cup qualifier from November 2016 after...