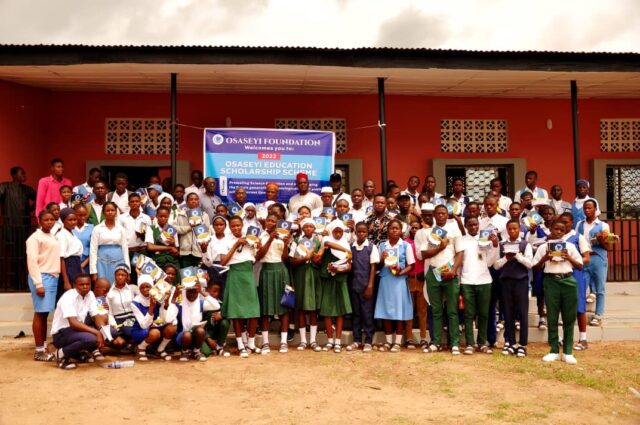 In collaboration with the Kogi State Ministry of Education, Science and Technology, Osaseyi Foundation awarded scholarship to students of some selected schools in Ijumu Local Government Area of Kogi State.

The program took place yesterday at Iyara Town Hall with the theme: Promoting Science Education and Encouraging the Future Generation Technologically in all Public Schools Across Ijumu Local Government Area.

The best students from the twenty schools were carefully selected across the Local Government Area with the help of Ministry of Education to serve as beneficiaries of the scholarship schemes facilitated by Osaseyi Foundation. Also, five students from selected schools benefited from the scholarship schemes after meeting the stipulated criteria put in place by the Foundation’s management team. The five students from each schools, making a sum of one hundred beneficiaries, who were lucky to have emerged as beneficiaries were with immediate effect awarded with a scholarship of one term school fees payment by the Foundation, and ten thousand naira each to be utilized for educational consumables in their respective schools.

The scholarship schemes cut across the Senior Secondary School category where overall best students were selected from SS1 to SS3. Best student in mathematics, and science were also awarded with scholarship and stipends to cater for their books and study materials.

Branded exercise books with the Osaseyi Foundation’s logo were also distributed to all students and schools present at the program, to encourage them to do more in their studies.
Teachers of these selected schools were not left out; as the Osaseyi Foundation for the first time in the history of Kogi State educational system decided to reward Teachers who have distinguished themselves by impacting core knowledge on their students.

The sum of fifty thousand naira each was awarded to the best Teacher from the twenty schools present. Making a total of twenty Teachers as beneficiaries. In total, the Osaseyi Foundation awarded the sum of one million naira to encourage twenty Teachers in Ijumu Local Government Area.

To commend the good work the Foundation is doing in the state, particularly in terms of education and empowerment, the Kogi State Ministry of Education, Science and Technology issued a commendation letter signed by the Honorable Commissioner, Honorable Wemi Jones, to commend and appreciate the Foundation and Founder, Mr Richard Osaseyi for giving back to the society through a sensitive and impactful channel.

Hon. Ibikunle Amodu Abubakar received the letter of commendation on behalf of the Founder and Chief Executive Officer of the Foundation, Mr Richard Osaseyi who was unavoidably absent due to other engagements, thanked the ministry of Education, the Kogi State Government, and the good people of Ijumu Local Government Area for appreciating the good works the Foundation is doing to affect the lives and livelihoods of the people positively.

Find below list of beneficiary schools across the Local Government Area:

Ward B youths give district mobilise area for APC