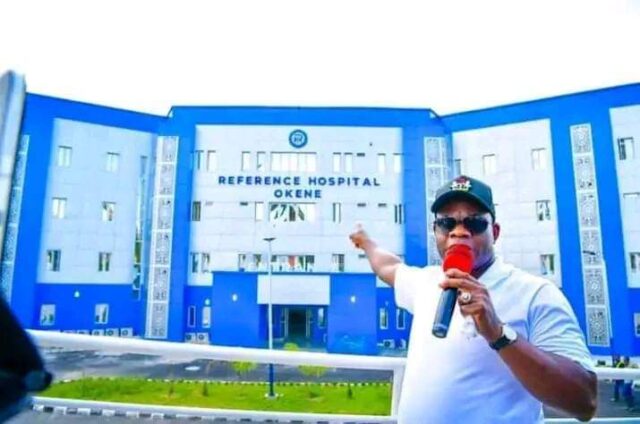 By Bayo A. Ibrahim

Unperturbed by months and years of orchestrated media attacks by the oppositions and political opponents, surprisingly, Gov. Yahaya Bello is now unveiling and reeling out enduring projects that many in the country termed “Legacy Projects”

Simply put, Gov. Yahaya Bello has proven that leaders are the problem solver of any society since their emergence flows organic from the society they belong to.

This aptly captures the growth and developmental trajectory of the Alhaji Yahaya Bello led administration in Kogi State which has over the years worked assiduously for the development of the state.

Though a product of circumstances, the Bello led government has since inception realized its manifest destiny of being the harbinger of development to the state.

It has however ensured that its imprints are visible in virtually all sectors as well all the nooks and crannies of the state.

In Bello’s bid to etch his name on the sand of time, he alongside other members of his team have set to work to reposition the state to be a reference point in the comity of other states.

For instance, it is to the credit of the governor that Kogi State is adjudged as one of the most peaceful in the country, removing it from the list of violence prone states.

This status didn’t come easy but credit should go to the government under the watch of the businessman turned politician who has overtime utilised proactive measures to ward off the activities of criminal elements from the state.

Apart from empowering law enforcement agents with the requisite equipment to carry out their work, Bello has also utilised the community based approach to policing to achieve the feat and fortnite ago, President Muhammadu Buhari awarded him the best Security governor in the country.

The state government has also accorded serious attention to the issue of quality healthcare with the provision facilities that would further expand access of residents to the healthcare delivery.

It is to Yahaya Bello’s credit that many hitherto non-functional facilities are brought back to life via repairs and rehabilitation. Many of these facilities have also been enjoying the provision of state-of-the-art facilities.

Perhaps the major achievement in that sector is establishment of a Reference Hospital in the Okene area of the state to cater for the tertiary health needs of the people. Those who should know have compared the facilities to others in advanced countries.
Facility like MRI EXam room were embedded in the hospital making it the 2nd in the world and 1st in Africa to have this latest Machine.
The governor’s achievement in healthcare sector didn’t stop here as many Basic healthcare hospital with first class facilities were built in all the three Senatorial districts.

Those who have continued to laud Bello for putting it in place said that apart from the building, the facilities that have been provided there can rival any in any of such anywhere in the world.

In the education sector, Bello has been relentless in his efforts to reposition the sector to deliver value taking into cognizance, the age long belief that today’s children are tomorrow’s leaders.

Bello believes passionately that tomorrow’s leaders must be properly moulded for future tasks of leadership and that education holds the key to achieving such goals.

The governor has commenced the task of rehabilitation of schools across the state to ensure that school pupils have a conducive environment for learning.

On the tertiary level, Gov. Yahaya Bello has established a Science University at Osara to further cater for the tertiary educational needs of residents of the state. The coming on board of the institution would further complement the existing one in State University at Ayingba.

The school has within a short period of time secured accreditation of the National Universities Commission (NUC) in all the courses it is offering. This came to be as the state government provided all the needed facilities that enabled the attainment of such a feat.
Today, Kogi State can boast of best the secondary school in Nigeria, The GYB Model Secondary school in Adankolo, Lokoja can be said to be the best in the country.

Also, in order to improve the standard of education and with qualitative tutors, the state has embarks on recruitment of qualify teachers across the state via a rigorous process.

Governor Yahaya Bello has carried out rehabilitation works on numerous township roads across the state more than any of his predecessors. One critical project of note that has not only ease commuting in Lokoja but has also ensured aesthetics of the state capital is the flyover project at Ganaja junction.

One unnoticed area of Gov. Bello’s administration is the issue of prompts payment of pension as at when due. In every quarter, Kogi State government pays between 900m to 1.3b as pension to the state retirees.

One would wonder how the state government had been able to finance these projects, kudos must go to Governor Bello’s financial wizardry as he been able to move the state’s internally generated revenue from about N500 million monthly when he came on board to N17.5 billion annually which amounts to N1.3 billion monthly.

One critical component of the state government was Bello’s ability to ensure an all-inclusive style of governance. This is because all shades of opinion as well as all demographics such as female gender and the youth form a significant portion of his government.

It is on record that Bello remains one of the few governors that have ensured transparency in his approach to governance of the state. This fact is further attested to by several organisations who have continued to laud the state government for its openness and impactful leadership.

2023: Youths must deviate from old norm, take up leadership role in our nation...

US Senator, McCain is dead at 81

Records Ronaldo and Messi have not broken (yet)