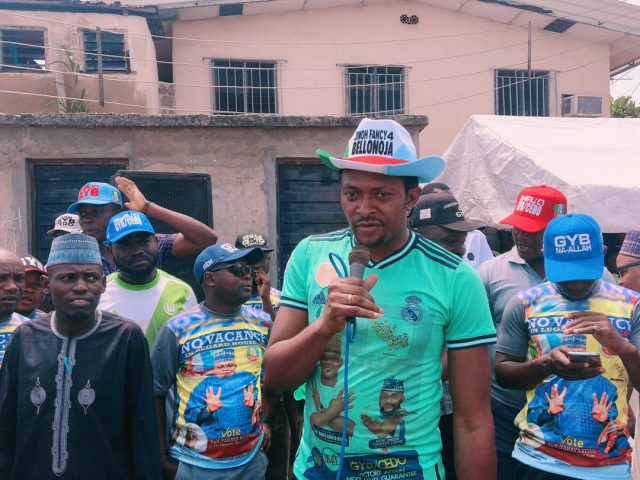 Lokoja Local Government is already experiencing the euphoria of the November 16th governorship poll as the All Progressives Congress, APC began its Ward-to-Ward Campaign with stakeholders making case for the party’s candidates, Governor Yahaya Bello and Senator Smart Adeyemi.

The Director General of the LGA Campaign, Hon Fancy-Jimoh Tiamiyu told the five Wards of ‘ABDC and E’ and Oworo visited on Wednesday that voting Governor Bello to retain his seat was the best option for the state and the people of Lokoja LGA.

He said the government of Alhaji Yahaya Bello was one that rewards hard work and determination, saying that what they record in vote would determine what they could bargain with in the end, hence the need for them to give him their maximum support and vote massively for the APC.

The DG also justified the candidature of the Governor by saying the administration has given every unit and ward in the Local Government the opportunity of participating in his government and given them a sense of belonging.

Hon Tiamiyu therefore appealed to the people to give the Governor the opportunity of completing the good works he has started for the state which has help revamp all sectors of the state’s economy, by giving him record votes on the 16th of November.

Speaking, the administrator of Lokoja LGA, Hon Muhammed Dan’Asabe made himself a case of study of the masses – centred policies of the Governor by saying Governor Bello runs a government of the commoners.

According to the administrator, Governor Bello is a man that looks out for committed and capable individuals that are ready to serve and then gives them opportunities, just as he had demonstrated with many sons and daughters of the Local Government Area.

Also speaking, the party’s candidate for the senate election, Sen Smart Adeyemi expressed confidence in the ability of the people to vote massively for the APC, and described Lokoja as the home of the party.

He promised to ensure adequate, people – centred representation if given the opportunity for another shot at the senate, saying the APC remained the only alternative for the state and the senatorial district.

Other stakeholders who spoke at the rallies applauded the party’s candidates and leaders for their courage and commitment to the cause of Governor Bello and Senator Adeyemi’s re – election, and promised to continue to back the party at all times.

Those on the Campaign train also include the DG Kogi West APC Campaign Council, Hon Haruna Isah; members representing Lokoja I and II, Hon Isah Umar and Hon Idris Ndako; the DG Independent Youth Mobilisation for BellOnoja 2019, Hon Abdullahi Adamu; the Special Adviser to the Governor on Job Creation and SMEs, Hon Suleiman Aguye among others.