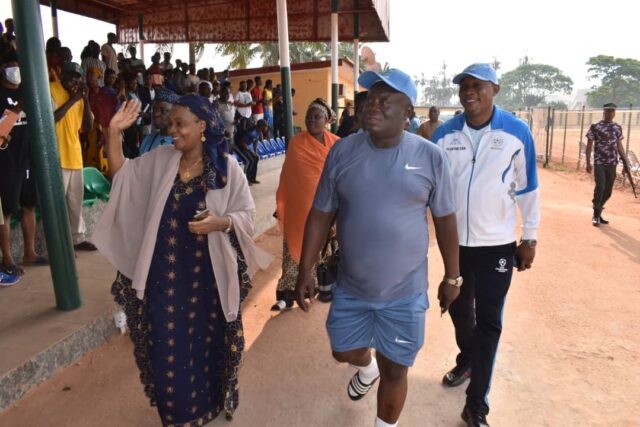 In her address at the opening ceremony, the Vice-Chancellor, Prince Abubabar Audu University, Professor Marietu Ohunene Tenuche, said she was highly delighted to host the Zone H of the NUGA preliminaries and welcomes all the officials and athletes who would be competing for qualification for the main events scheduled for the University of Lagos later in the year.

She informed participants that promotion of sporting activities has been a cardinal priority of theUniversity administration since coming on board in 2020, stressing that apart from the health and long term monetary benefits, the University considers the immediate implication which is the diversion of students’ attention from crimes and criminalities.

The Vice-Chancellor added that it was in view of such commitment that the administration has devoted significant attention to the improvement of sporting facilities on campus.

Among the areas of improvement highlighted by the Vice-Chancellor include the completion and unveiling of the basketball, volleyball and lawn tennis courts located directly opposite the University Stadium and the rehabilitation of the badminton, squash courts and the swimming pool located at the University Staff Club.

Professor Tenuche also informed participants that Work on the Handball court was at the advanced stage of completion.

The Vice-Chancellor further informed the gathering that the University successfully staged the 2021 edition of the Inter-Faculty sports competition as part of its commitment to the growth of sports, adding that the efforts have been able to meaningfully engage the students at their leisure hours. She promised to ensure that the competition remains an annual event in the University.

She used the occasion to commend some members of staff and other sports enthusiasts who have been strongly involved in the promotion of sporting activities on campus. Among those she mentioned include the Deputy Vice-Chancellor (Administration), Professor Olusola Jamiu Saliu, Deputy Vice Chancellor (Academic), Dr Daniel Friday Atidoga, Professor Felix Enegho of the Faculty of Arts and Humanities, the Chairman of the University Sports Council, Dr Olanrewaju Makinde, the Acting Director of Sports, Comrade Moses Balogun and the entire coaching crew and officials of the Sports Directorate. She thanked them for their physical, moral and financial contributions to the growth of sports in the University.

The Vice-Chancellor thanked God almighty for the safe arrival of the officials and athletes and assured them of their safety and comfort throughout the duration of the competition.

She expressed the hope that the spirit of friendliness which is an integral aspect of sports would be strengthened among participating athletes and officials at the end of the competition.

The Zone H Preliminaries which commenced on Wednesday, 16th February is expected to end on Friday, 17th February, 2022. Athletes who qualify from the zone will join qualifiers from 14 other zones to vie for laurels at the Nigerian Universities Games scheduled for 16th – 26th March, 2022, at the University of Lagos.